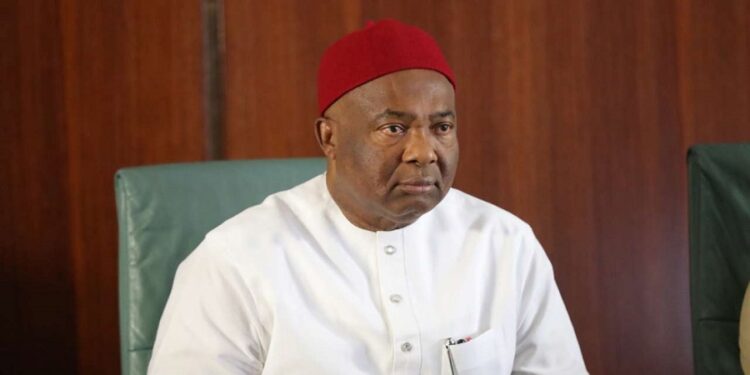 The Imo State Government has flagged off “Exercise Golden Dawn,” an initiative of the Nigerian Armed Forces, in a bid to stop the rising state of insurgency in the South-East state.

This was launched by State Governor Hope Uzodimma, in collaboration with the 34 Artillery Brigade Forward Operation Base in Orlu Local Government Area of the state on Wednesday, according to the News Agency of Nigeria.

The Governor revealed that the exercise would be carried out for three months to restore peace to the area for the Christmas season.

What the Governor said about Exercise Golden Dawn

Governor Uzodimma said, “This is a special period and season in the lives of the people of the South-East who are predominantly Christians coming back for the celebration of Christmas which usually lasts from October to December.

“This exercise will go a long way in improving the security situation in our geo-political zone, giving our people a sense of security and encouraging our brothers and sisters who are resident abroad to come home without fear.”

He praised Nigeria’s security institutions operating in the state for their efforts in addressing insurgency there, thanking the Chief of Army Staff, Lt.-Gen. Farouk Yahaya, all officers and soldiers of the 34 Artillery Brigade, Obinze, near Owerri for their efforts to achieve peace in Imo.

Commander, 34 Artillery Brigade, Obinze, Brig.-Gen. Utsaha, stated that the exercise was meant to “build on the gains so far recorded over the menace of the proscribed Indigenous People of Biafra (IPOB) and its Eastern Security Network (ESN).”

He added that members of the armed forces participating in the exercise would be based in Orlu for the rest of the year to ensure that socio-economic activities in the area and Imo would continue during the yuletide season.

Recall Nairametrics reported that Governors of the South East region said they would do everything in their power to end the “sit-at-home” order of the proscribed Independent People of Biafra (IPOB).

Ebonyi State Governor, Dave Umahi, said the region’s governors were worried about the rising insecurity in the region and condemned the continued “sit-at-home” order, adding that the regional security outfit, “Ebubeagu,” would be launched to help counter insecurity, and laws would be passed in all the states to that effect before the end of 2021.