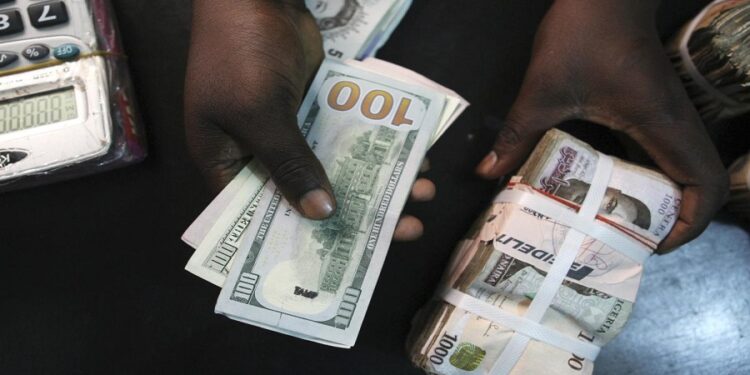 Wednesday, 6th October 2021: The exchange rate between the naira and the US dollar closed at N414.73/$1, at the Investors and Exporters window, where forex is traded officially.

The exchange rate at the parallel market remained flat as it closed at N575/$1 on Wednesday, the same as recorded on Tuesday, 5th October 2021. This is according to information obtained by Nairametrics from BDC operators in Lagos.

Meanwhile, Nigeria’s foreign reserve recorded a boost of $214.7 million on Tuesday, 5th October 2021 to close at $37.8 billion compared to $37.6 billion recorded as of the previous day.

The opening indicative rate closed at N414.33/$1 on Wednesday, representing a 30 kobo depreciation compared to N414.03/$1 recorded in the previous trading day.

Meanwhile, forex turnover at the official window grew by 118% on Wednesday, 6th October 2021.

According to data tracked by Nairametrics from FMDQ, forex turnover increased from $122.15 million recorded on Tuesday to $266.32 million on Wednesday 6th October 2021.

World most popular and capitalised crypto asset, Bitcoin crossed $55,000 on Wednesday to close at $55,153.79, indicating increased positive investor sentiments towards the highly demanded crypto asset and a gain of 7.09% in a single day.

Meanwhile, Nigerian traded about $32.16 million in bitcoin in the month of September, indicating a drop compared to $44 million recorded in the previous month. The total trading volumes between January and September 2021 stood at $315.76 million.

The positive rally came on the back of U.S Bank, the fifth-largest retail bank in the United States’ announcement that it is launching a cryptocurrency custody service that will be available to institutional investors.

The move is expected to help set the stage for wider adoption of cryptocurrency assets by institutional investors and fund managers.

The crude oil market ended the day on a bearish note, as Brent Crude dipped 2.19% to close at $80.75 per barrel, compared to $82.56 recorded as the close of trading activities in the previous day.

Similarly, West Texas Intermediate also recorded a decline of 2.52% to close at $76.54 as opposed to $79.1 per barrel recorded in the previous day, while Natural Gas closed at $5.675 per barrel on Tuesday.

Nigeria’s crude, Bonny Light traded bullish on Wednesday as its price increased by 1.67% to close at $82.08 per barrel, while other Nigerian crude Brass River and Qua Iboe both recorded 1.81% gains apiece to close at $82.6 per barrel.

The market had witnessed bullish trades since last week and more recently following the OPEC+ decision to maintain its production increases of 400,000 bpd per month. In the meeting, all participating states agreed that sticking to the initially designed course would be in the collective interest of the group.

Nigeria’s foreign reserve recorded a boost of $214.7 million on Tuesday, 5th October 2021 to close at $37.8 billion compared to $37.6 billion recorded as of the previous day. The latest increase represents a 0.6% increase in the country’s foreign reserve.

The reserve gained a record of $2.76 billion in the month of September 2021, while the recent gain puts the year-to-date gain at $2.41 billion. It is also worth noting that Nigeria’s reserve has gained $1 billion in just 2 days into October 2021.

The recent increase in the reserve position, which has continued since the 25th of August 2021 is in line with a recent report suggesting that Nigeria’s foreign reserve position could grow as high as $40 billion by the end of September 2021.

Although the reserves did not hit $40 billion as predicted in the previous month, however, it continues to record positive growth and could cross the predicted line by the end of the month, if it maintains this trajectory.

With the $4 billion raised by the federal government through Eurobond sourced from the international debt market, the reserve is likely to get more firepower in the coming weeks.