There is a strong indication that the federal government would soon start disbursing the approved bailout fund of N5billion to operators in the aviation sector, which is intended to ameliorate the harsh realities of the COVID-19 pandemic on their business operations.

The disclosure was made by the Minister of Aviation, Senator Hadi Sirika, to the key stakeholders, during the ongoing three-day public hearing to repeal and enact Acts of the Nigerian Civil Aviation Authority (NCAA), the Nigerian Airspace Management Agency (NAMA), Accident Investigation Bureau (AIB), Nigerian College of Aviation Technology (NCAT), Nigerian Meteorological Agency (NIMET), and that of the Federal Airports Authority of Nigeria (FAAN).

According to the Minister, out of the N5 billion bailout fund, N4 billion would go the domestic airlines, while the balance of N1 billion will be fairly shared amongst other agencies and other relevant aviation companies that were severely affected by the pandemic.

According to the Chairman, Senate Committee on Aviation, Senator Adeyemi Smart, he considers the bail-out fund as too small to cushion the effects the pandemic had on the operators’ businesses and requested the FG to magnanimously review to a more reasonable amount, that would be sufficient to bail the operators out.

In his words, “N4 billion is very little to solve some of the problems of the airlines, who are battling to survive. We urge the government to take charge of the sector. They need to give them more and they also need to support in all ways.”

That COVID-19 pandemic pummeled Nigeria’s aviation industry is no longer a subject of argument or analysis, but the impact of its devastating effects will take a long time and resources to erase. A beleaguered sector that was merely floating, got hit by a ravaging pandemic, albeit unprepared, and caught some of the airlines’ hemorrhaging.

At the commencement of aviation activities after over three-month lockdown as a result of the whirlwind of COVID-19 pandemic, the Federal Government promised to assist the industry with N27 billion bailout palliative, to cushion the effects of the lockdown in the industry.

It is important to know that some airlines have been limping since life came back to the sector, after the lockdown, in the hope that the proposed bailout would speedily come to provide them with the much-needed lifeline/succor for them.

No doubt this fund would go a long way in assisting the sector to rebound, but not adequate to assuage the excruciating losses and pains inflicted by the pandemic on the sector. 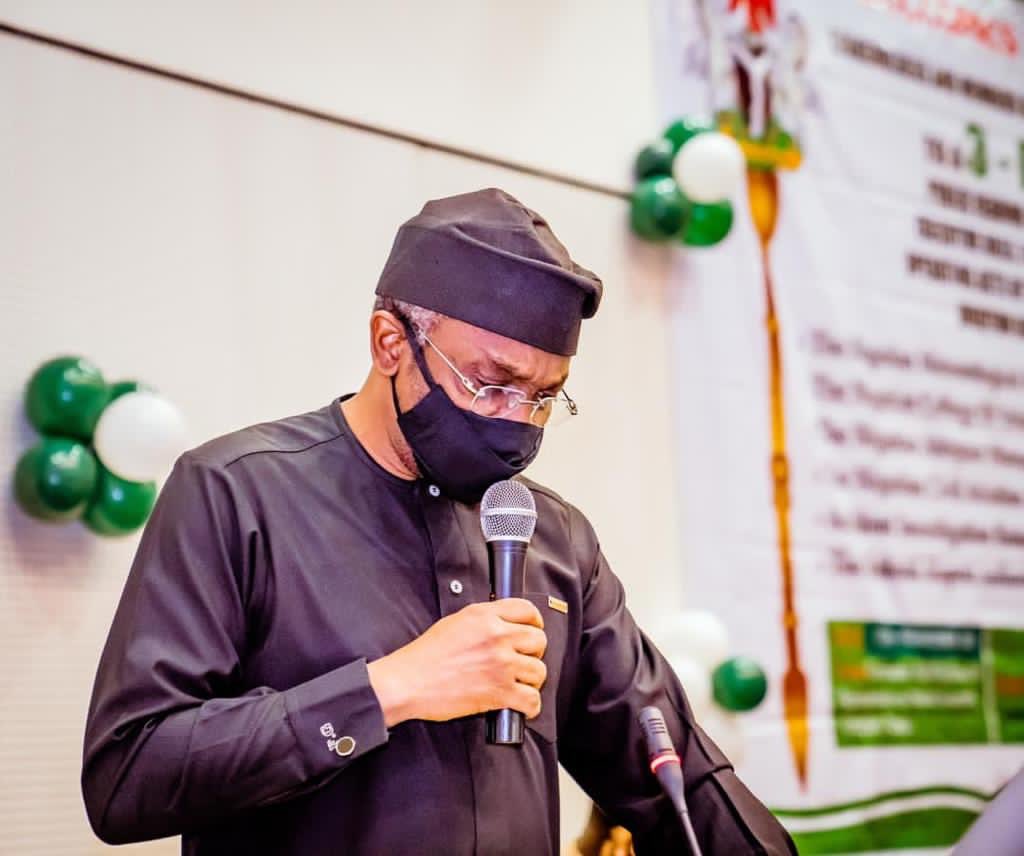 The House of Representatives has promised to support total reforms in the aviation industry through legislation, as it appeals for active participation of stakeholders in public hearings.

This was disclosed by the Speaker of the House of Representatives, Femi Gbajabiamila, via his Twitter handle on Tuesday.

According to him, the House has identified that the aviation industry is a key contributor to the growth of the country’s economy and through legislation it would do all it can to develop the industry.

During the opening of a 3-day public hearing session on six aviation-sector bills by the Committee on Aviation, he explained that the draft legislation would make the sector more effective and efficient.

He said, “It is imperative to note that the development of our aviation industry is an added advantage to the growth of our economy. It is in this vein that the House of Representatives will continue to support total rehabilitation and upgrading of our airports and allied services.

“The consideration of these Bills during this Public Hearing is a testament to our commitment to give new life to the aviation sector and make our airports to be a better non-oil revenue-generating sector as is witnessed in other advanced economies.”

The Speaker appealed to the public and interested parties to honour invitations to House committee public hearings so that they can share ideas on how to make critical sectors deliver optimally.

The House of Representatives will continue to support total reforms in the aviation industry, a key contributor to the growth of the country's economy, through legislation, Speaker Femi Gbajabiamila has said.

— Speaker of the House of Representatives (@SpeakerGbaja) November 17, 2020

The total reform is important for the industry as it is not out of question that the establishment laws for the service-provider Aviation agencies like Federal Airports Authority of Nigeria, Nigerian Airspace Management Agency, Nigerian Meteorological Agency, Nigerian College of Aviation Technology and the regulatory body: Nigeria Civil Aviation Authority are far from meeting up with the international best practices hence the need to amend and bring them in conformity with the international best standards.

FG has given approval to Lufthansa, Air France/KLM and Qatar airlines to resume flight operations in Nigeria.

The Federal Government has given go ahead to Lufthansa, Air France/KLM, and Qatar Airways to resume their flight operations in Nigeria.

This was disclosed on Tuesday by the Minister of Aviation, Hadi Sirika, via his Twitter handle.

READ: BUA Group, FAVA of Italy sign agreement for supply and installation of a 720tons/day pasta processing plant in Nigeria

Following the gradual ease of the COVID-19 led lockdown, the Minister explained that he is discussing with the Ministry of Health, CACOVID, and the Presidential Task force to open Kano, Port Harcourt, and Enugu airports.

He tweeted, “We are working with Ministry of Health, CACOVID & The PTF to open Kano, Port Harcourt & possibly Enugu airports before the end of the year. Also Lufthansa, Air France/KLM has been given go ahead to resume. Qatar Airways is approved to start Abuja. Thank you for your patience.”

We are working with Ministry of Health, CACOVID & The PTF to open Kano, Port Harcourt & possibly Enugu airports before the end of the year. Also Lufthansa, Air France/KLM has been given go ahead to resume. Qatar Airways is approved to start Abuja. Thank you for your patience🙏🏽🇳🇬

Recently, Nairametrics reported that Nigerian Civil Aviation Authority (NCAA) updated the schedules of International flights with effect from October 2, 2020, as the agency stated that a maximum of 200 passengers are allowed per flight.

This was disclosed by the agency via its Twitter handle on Saturday.

In a letter addressed to all foreign airline operators flying to Nigeria, NCAA explained that the update followed the request for additional flight frequencies by the airlines.

The effects of COVID-19 induced lockdowns and travel restrictions have forced ground handling firms to consider job cuts, and cost reduction measures in a bid to survive. Major ground handling companies in Nigeria are facing a revenue crisis following published results in the first nine months of 2020. Reports from two of the major listed ground handling companies listed on the Nigerian Stock Exchange, reveals a revenue decline of over 20%, due to a fall out of the COVID-19 induced lockdowns and travel restrictions.

The state of their financials led some of them to consider job cuts, and cost reduction measures in a bid to survive even after the lockdown was eased.

Since the breakout of COVID-19 in March 2020; the FG approved lockdown in Abuja and Lagos State, both international airport hubs, forcing most airlines to shut down operations. This further affected the operations of the ground handling firm, as the government sought to contain the spread of the virus.

Aside from the COVID-19 pandemic dilemma, the sector was also affected by the activities of #EndSARS protesters that blocked the entrances of the Lagos airport to express their grievances against police brutality and extortion in the country.

According to their financials, the drop represents a 21% reduction in revenue in the period under review.

Country Manager, Nigeria & West Africa, Qatar Airways, Kennedy Chirchir, explained that the state of the sector is the result of the new normal of the industry, which means a total paradigm shift.

He said, “We are moving to the digital space where physical interaction would be reduced drastically. Most of the operations will be on a digital platform. There will be more requirements in terms of the turnaround of aircraft. Before now, it takes about 1 hour for aircraft to turnaround, but now it may take as long as 2 or 3 hours because there would be stricter checks. These will happen but will not stop people from travelling and that means the future is bright for the sector.”

On the part of travel agencies, Managing Director, BTM Travels Limited, Lola Adefope, explained that the adoption of technology would be emphasized. Before this, she insisted that it was important for operators and regulatory authorities to ensure that right policies and processes were in place to drive the technology, else the nation would be placing the cart before the horse.

“What we need to do is to implement a proper education process and platform. That is to ensure people understand the risk of travel and the safety measures in place with the technology to support the process. The technology will push notifications to people directly.

“We are going to see a move to much smaller groups when it comes to actual leisure travel. Leisure travel won’t develop at the international scene immediately, but we have to develop domestic tourism. We must put in place policies and processes before we open our borders for intercontinental or international tourism,” she said.

Legit ways to make money with your phone