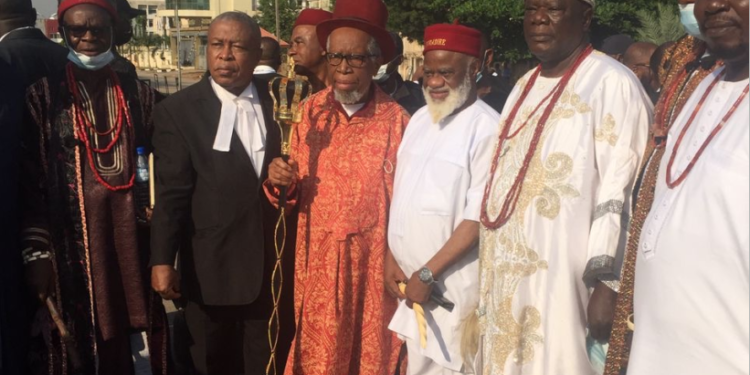 Nnamdi Kanu, leader of the Indigenous People of Biafra (IPOB) is set to be arraigned before Justice Binta Nyako of the Abuja division of the Federal High court.

Just like the last adjourned date, traditional leaders from Igbo land have been barred from the court premises. Chief Chukwuemeka Ezeife, former Governor of Anambra state was also among the important personalities who were denied access into the court premises. Ezeife was in the company of other traditional leaders from the eastern part of Nigeria.

Heavy security presence was visible around the court premises as officials of the Department of State Services (DSS) barricaded the entrance of the court premises. Commuters have also had to trek a distance in order to be able to access their businesses around the area because of the restriction of movement by security personnel.

On October 21, Nairametrics reported that Kanu was re-arraigned on a fresh 7 count-charge bordering on alleged terrorism and treasonable felony slammed against him by the Department of State Security (DSS).

Kanu pleaded not guilty to the charges.

His application to be transferred to Kuje prison was dismissed by the judge at the last adjourned date.