#EndSARS: Police in Lagos and Osun warn against street protests, threaten to arrest any protester

by William Ukpe
in News, Spotlight 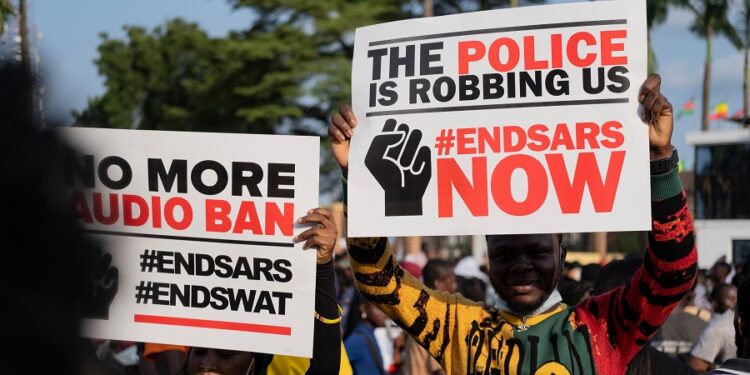 A year after the fatal Lekki shooting, Police commands in Lagos and Osun States have warned protesters not to carry out protests in remembrance of the Lekki event, with the Osun Police Force warning that it would arrest protesters.

This was disclosed in a statement signed by the Lagos Police Command’s Spokesperson, CSP Adekunle Ajisebutu and Osun State Police Spokesperson, SP Yemisi Opalola, on Tuesday.

The Lagos Police command said they would only allow a virtual event for the occasion, while the Osun Police warned that they would not allow any form of protest.

What the Police Command said

For Lagos, they said, “Attention of the Lagos State Police Command has been drawn to a post being circulated on the social media insinuating that the police in Lagos have agreed to allow street protests in commemoration of the one-year #EndSARS anniversary on Oct. 20.

“On the contrary, the police will only allow an indoor and virtual event in commemoration of the #EndSARS anniversary and will provide adequate security at the venue(s) if known.

“This is in recognition of the rights of every Nigerian to express his or her interest.

“We wish we could permit such street protests. However, intelligence at our disposal has revealed plans by some faceless groups or individuals to stage an anti-EndSARS anniversary protest in the state on the same day.

“In view of the conflicting interests between the pro and anti- EndSARS anniversary groups and threat to cause mayhem, the Command once again warns both groups against any form of street protest between now and Oct. 21 and beyond.”

Meanwhile, in Osun, the Police stated, “The intelligence that availed the police command revealed clandestine plans by some youths/group of people to embark on protest in commemoration of one year anniversary of EndSARS scheduled to hold Oct. 20.

“In view of this, the Commissioner of Police, Olawale Olokode, hereby warn individuals or group and their sponsor(s) to stop the plan or any of such action forthwith.

“The command will not allow a repeat of last year EndSARS saga and is fully prepared to use all legitimate means to avert such intending protest.

“The police command will not tolerate any unlawful protest/gathering or assembly that will jeopardise the peace of the state.”

They also claimed that last year’s EndSARS protest, which caused pain, anguish, needless loss of lives and wanton destruction of public and private property, still lingered in the minds of Nigerians, especially the police and other security agencies.

“Therefore, the CP has given marching orders to the Area commanders, Divisional Police Officers and Tactical units to be at alert and nip in the bud any act capable of truncating the peace of the State,” they said.

Nairametrics reported earlier that the FG had said that it would compensate the victims of the EndSARS protests with each State in collaboration, with the Federal Government establishing the modalities for the settlement of all monetary compensations awarded by the panels.

The government also urged protesters to reconsider marking the anniversary of the protests due to national security concerns.

#EndSARS: Police in Lagos and Osun warn against street protests, threaten to arrest any protester