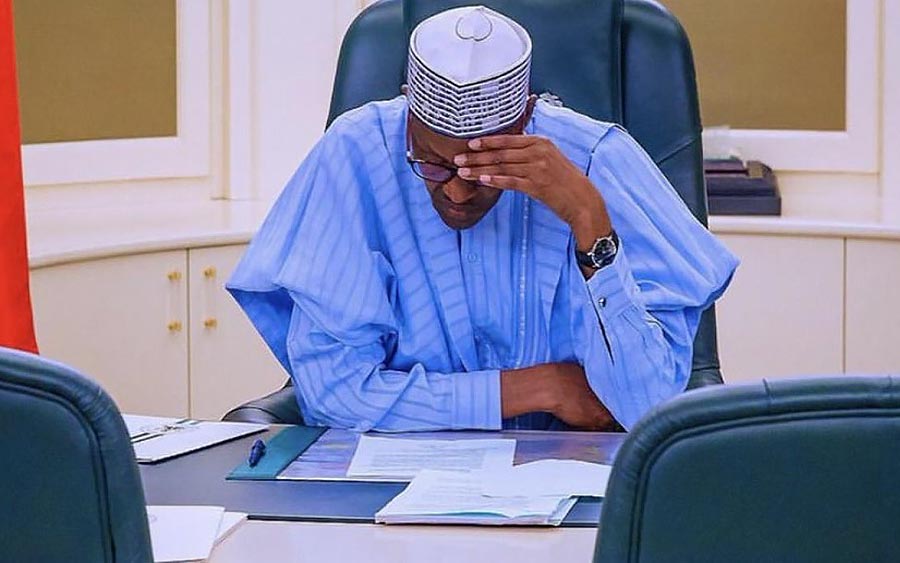 This is similar to the country’s debt structure in the same period of 2019 when domestic debt made up 68.45% of total public debt and external debt made up 31.55%. Whilst debt to GDP ratio remains within the acceptable threshold, we are increasingly concerned about the nation’s ballooning debt service to revenue ratio.

Recall that the Federal Government of Nigeria following a series of revisions to the 2020 appropriation bill arrived at a fiscal deficit of N4.98trn. Based on the finance ministry data, an aggregation of debt monetization (N2.86trn) and New borrowings (N3.28trn) was used to finance the deficit.

The 2021 appropriation bill forecasts a budget deficit of N5.60tn which would be financed mainly by borrowings of N4.69tn, privatization proceeds of N205.15bn and project linked bilateral & multilateral loans of N709.69bn. The country’s financing structure is of concern when one considers that the budget is tilted more towards recurrent expenditure than capital expenditure and raises questions on the sustainability of the current fiscal practices.

Nigeria continues to face issues of poor revenue generation and lack of will to efficiently manage its expenditure. No significant cuts have been made to its overheads and statutory spending has continued to rise. Nigeria’s growing debt stock with little to show for it in terms of capital expenditure remains a major concern.

How EFCC’s proposed lifestyle audit will affect your finances

While enforcing lifestyle audit, the relevant agencies must take note of the fact that social media influencing has become a serious business in Nigeria. On Wednesday, the 24th of March 2021, Lauretta Onochie, a presidential aide, took to Twitter, to announce the legality of lifestyle audit in Nigeria, with a view to tackling corruption. She also mentioned that those who flaunt lifestyles they cannot afford can now be investigated by any of the antigraft agencies such as the Economic and Financial Crimes Commission (EFCC) and Independent Corrupt Practices Commission (ICPC) to give information about their source of wealth.

Some Nigerians have already expressed delight in the government’s action, hailing it as a great move, while others have heavily criticized it, adding that such lifestyle audit should be for those in public offices and those holding political positions in Nigeria.

The implication of lifestyle auditing

Lifestyle audit basically involves an inquiry into the lifestyle of individuals for the purposes of revealing unreported cases of unjust self-enrichment and suspicious affluence that may suggest that such individual perpetrates fraud or is involved in corrupt activities. In carrying out such an audit, there is a comparison of the living standards of the said individual with his known source of income.

There is also an inquiry into the consumer index of such an individual, which includes the income of his or her spouse, the monthly expenses of the family, the declared assets of the family and related personal expenditure of such individual. It is considered a major tool in fighting corruption.

Whether such audit is conducted in the public sector, i.e. on those in public offices or employees of government, or whether it is carried out in the private sector, the major goal of a lifestyle audit is to consider whether or not an individual is living beyond his or her legal means, and whether there is a possibility that such lifestyle is funded by corruption or fraud.

If during the course of the audit, the individual is unable to prove the source of funds or income, such funds may be taxed as undisclosed income, and if it is discovered during such investigations that the individual is involved in fraud or any criminal related activity, such individual may be prosecuted.

Is Nigeria the first to legalise lifestyle audit?

Countries like Kenya and South Africa have been carrying out lifestyle audits. Kenya for instance has embraced lifestyle audit as a means to reduce corruption in both the private and public sectors. Government institutions in Kenya audit their staff by comparing the lifestyle of such staff with their income, in order to reveal any inconsistencies.

In the private sector, lifestyle audits are also carried out on employees who declare their wealth, allowing for an investigation into the existence of any questionable source of income or revenue.

The Ethics and Anti-Corruption Commission of Kenya in 2008 took a financial controller who was earning Sh306, 000 a month to Court. But the EACC said he owned seven houses or plots, four vehicles, six bank accounts (one in London) and had Sh4 million in cash in his house. What the EACC wanted was for the court to agree he had “unexplained assets” and that the assets should be seized. The lower court rejected the EACC’s case on a variety of grounds based on the Constitution. However, the Court of Appeal held that the Financial Controller had not shown how he had acquired some of the assets.

In 2018, the Kenyan Government intensified the war on graft by announcing that all public servants will undergo a compulsory lifestyle audit to account for their sources of wealth. In an article published by the Katiba Institute, Kenya, on 27 June 2018, it was reported that various corruption scandals have been exposed and over 40 persons have been arrested as a result of corruption scandals resulting from lifestyle audit in Kenya.

Business Insider South Africa has stated in an article published recently, that SARS has been using lifestyle audits on private individuals since 2007 and they have used it to conduct thousands of criminal investigations.

While enforcing lifestyle audit in Nigeria, the relevant agencies may need to take note of the fact that social media influencing has become a serious business in Nigeria today. What usually happens is that these influencers present a lifestyle to the public which they may not be able to afford or which cannot be said to be at par with their income.

The reason for such presentation is to get more followers on social media and attract brands and businesses that would usually enter into an agreement with them to influence the public to patronize the products of such brands in return for a fee. The question now arises, what becomes the fate of such influencers in the face of the legalizing of lifestyle audit in Nigeria? What effect would it have on their businesses since they are not considered illegal?

In an interview with Elsie Godwin, a YouTube content creator, Lekan Bamidele, the Managing Partner of Lekan Bamidele & Co stated that there is a huge possibility that lifestyle audit may lead to an invasion of the privacy of the audited individuals which is an infringement of their fundamental human rights as guaranteed by the Constitution of the Federal Republic of Nigeria 1999 (as amended). This is because, in carrying out such audits, the private properties of such individuals such as their phones, bank statements etc. may be looked into even without their consent.

However, based on the provisions of the Nigerian constitution the right to privacy is not absolute and an invasion of privacy would not be considered as an infringement where it is for the purpose of public morality, public order, etc. The actions of the agencies carrying out such audit may be considered as falling under this exception and would not be illegal.

Moreover, since Nigeria still battles with issues such as police brutality and sometimes, unwarranted profiling which led to the recent #EndSars protest, lifestyle auditing may give unscrupulous officials the leverage to treat citizens with indignity and may also lead to the abuse of the entire auditing process. It, therefore, opens a lot of Nigerians to the risk of harassment and unnecessary profiling.

Additionally, it is a notorious fact that one of the major problems facing Nigeria is corruption. Corruption is a phenomenon that has eaten deep into the systems and permeated every level of governance in the country and even the agencies of government. It may, therefore, pose a major threat to the smooth running and enforcement of lifestyle audit in Nigeria.

Conclusively, the relevant body or agencies should take these and more into consideration, and a formal structure should be put in place, and legislation enacted, in order to effectively carry out lifestyle audit in Nigeria. Also, there should be no overlapping of duties in the enforcement. That is, only agencies that are vested with such powers should exercise them. This would ensure that Nigerians are not faced with a situation where just any person would claim the right to investigate the source of their income.

State governments must devise innovative means to improve their IGR Based on the Q4 and full-year 2020 IGR data published by the National Bureau of Statistics (NBS), the Internally Generated Revenue (IGR) of the 36 states of the federation, including the Federal Capital Territory (FCT), declined by 2% y/y to N1.31trn in 2020 from N1.33trn in 2019.

We think the decline in Direct Assessment reflects the low-income level of self-employed individuals and informal businesses arising from reduced work activities and tough business conditions. Similarly, restricted vehicular movements both within and out of states, closure of markets, malls, recreational centres and limited running of revenue-generating MDAs especially during the second quarter (Q2) contributed to the fall recorded across the remaining key constituents of the total IGR of all states including the FCT.

Worth noting is that while most states have continued to rely heavily on FAAC allocation to meet budgetary commitments, Lagos (78%) and Ogun (57%) states including the FCT (57%) had the most healthy composition of IGR revenue to its respective total revenue in 2020. The vast economic activities in Lagos and Ogun states, an offshoot of their positioning as a good spot for import and export of materials and finished products, enable a good flow of commercial activities.

Many states continue to rely solely on FAAC allocations from the Federal Government which are totally dependent on dwindling oil revenues. State governments need to come up with innovative ideas to improve IGR and also create an enabling business environment to attract Foreign Direct Investments (FDI) to avoid the current situation where many states cannot as much pay salaries when oil receipts begin to fall.