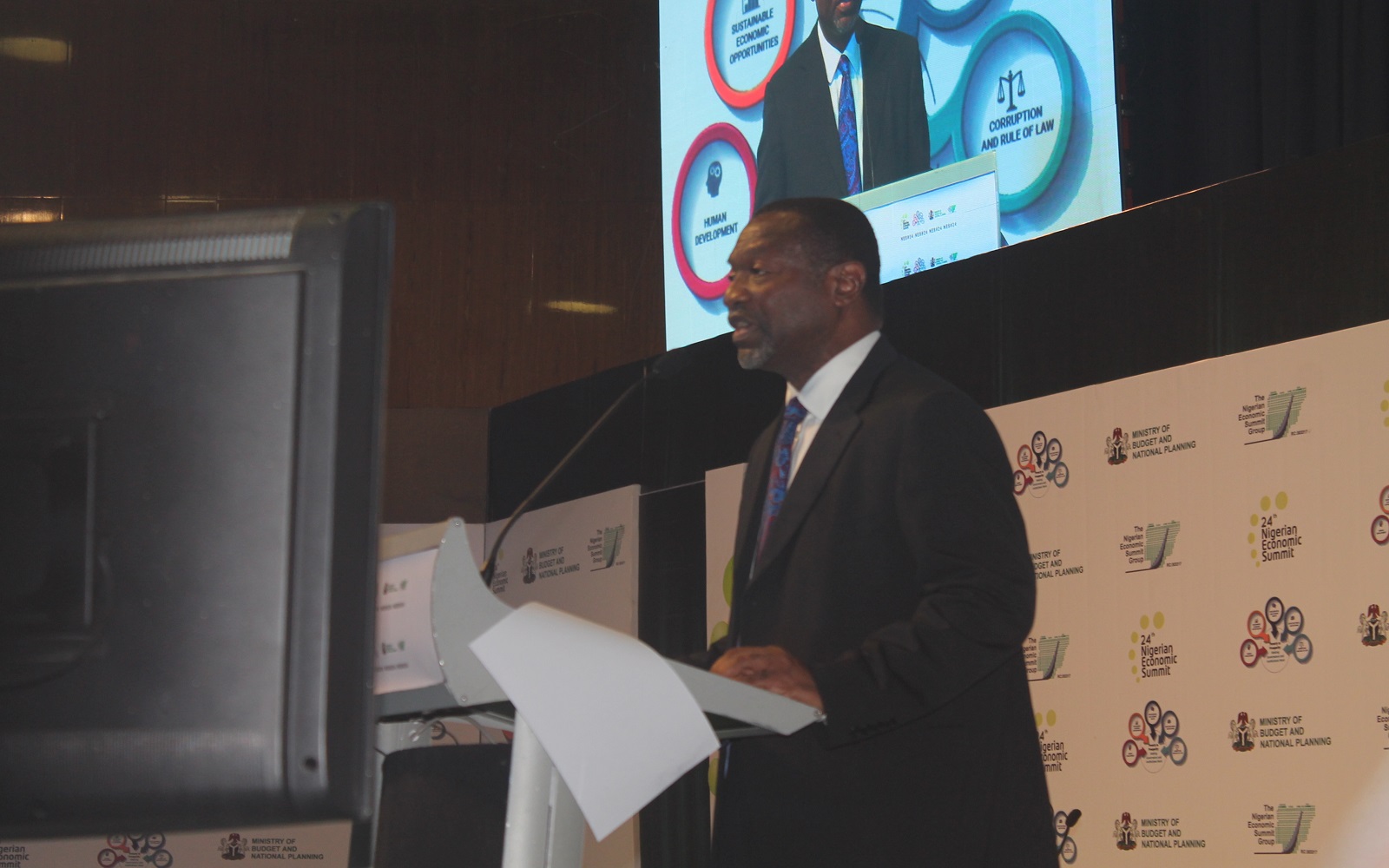 The Minister made this disclosure while speaking during the ongoing 24th Nigerian Economic Summit in Abuja.

According to him, the development is the direct outcome of the Federal Government’s Economic Recovery Growth Plan (ERGP) which has facilitated a considerable development of Nigeria’s gold sector.

“As an outcome of the ERGP focus labs, we have also been able to accelerate the development of the national gold development policy and the establishment of a Federal Gold Reserves Scheme in Nigeria.

“Today, I am happy to inform us that the first gold refining licence has been issued to a company called Kian Smith Limited, which was one of the companies that participated in the labs. The Federal Government is finalising modalities to purchase gold from local refiners, via a Federal Gold Reserves Scheme.” -Udoma

Recall that Nairametrics had earlier quoted Alhaji Abubakar Bwari, the Minister of state, Mines and Steel Development as saying that some private investors did express their readiness to commit about $3.32 billion to fund some key projects in the mining sector.

The Minister had specifically stated the fund would be used to finance gold mining and refining, foundry works, lead/zinc exploration and production, tin, tantalite and columbite mining and processing.

The minister said that the ministry was making effort to focus on tackling challenges hindering the formal exploitation of gold, tin and lead-zinc as well stop indiscriminate exports of these mineral commodities to foreign smelters.

He further stated that Nigeria without crude can survive, given her huge potential in the non-oil sector. Agriculture, mines and steel among others, are lucrative areas capable of putting the economy on a prosperous path.

Meanwhile, mineral resources’ contribution to the nation’s Gross Domestic Product (GDP) was abysmally low, hovering within the region of N103 billion in 2014 despite the country being blessed with over 44 types of solid minerals in varying quantities across the 36 states and Federal Capital Territory ( FCT) of the country.

In view of this, it would not be erroneous to say Nigeria’s mining sector has been dormant and abandoned for illegal miners to profit from, while genuine investors have been made to look on.

Kian Smith is a Nigerian company registered in 2011. The company operates in minerals, commodities and marine services.

The Governor said the facility will benefit low-cost schools with amounts ranging from N500,000 to N5 million. Lagos State government has launched a N5billion support fund to help reduce the impact of Coronavirus pandemic on low-cost private schools in the state.

This was disclosed by the Governor of the state, Babajide Sanwo-Olu via his Twitter handle on Friday.

According to him, the educational sector is one of those severely impacted by the pandemic, with schools and vocational learning-centres shut since March.

He said, “With access to funding for privately owned schools and vocational training centres in the state, we are confident that this programme, under the partnership between First Bank Nigeria and Lagos State Education Trust Fund (LSETF) will help accelerate a sustainable return to learning and skills acquisition.”

Today, I launched a N5bn support fund to help reduce the impact of #COVID19 on low-cost private schools in Lagos. The educational sector is one of those severely impacted by the pandemic, with schools and vocational learning-centres shut since March. #EducationMeetsFunding pic.twitter.com/PrKjLhxBXq

He explained that the facility will benefit 2,000 low-cost schools with amounts ranging from N500,000 to N5 million.

“As a responsible Government, we are obligated to provide interventions that would enable learners in schools study in line with the new normal,” the Governor Sanwo-Olu added.

The Chief Executive Officer, First Bank Nigeria, Dr Adesola Adeduntan, said “With this partnership, we are sure that registered educational institutions in Lagos State will have access to funds at subsidised interest rates to meet their needs as they reopen at this auspicious time.”

Oviosu announced that he is very excited about moving to and working with the UK government. Paga Group has redomiciled from Mauritius to the United Kingdom (UK). The group is the holding company for its operations in Nigeria, México, Ethiopia, and the UK.

This was disclosed by the Chief Executive Officer and founder, Paga, Tayo Oviosu on Friday.

The Paga Group has redomiciled to the UK 🇬🇧!

The Paga Group is the holding company for our operations in all countries – Nigeria, México, Ethiopia, and the United Kingdom.

Very excited about this move and look forward to working with @tradegovuk to promote trade with the UK!

Why it matters: The company took the decision due to bureaucratic challenges it faced last year.

He said, “The laws and courts of Mauritius are not very fast-moving, and the rules are difficult. I’ve had one court case that was eventually thrown out after a year.

“In the UK it would have been thrown out immediately, and the person would have had to pay us for our lawyer fees.

“Basically, not an easy place to do business. It is more painful than useful. I say stick to good ol’ America or UK or Netherlands or Luxemburg. Where you know there are professionals, and the legal system works.”

Oviosu said he is very excited about the move, looks forward to working with the UK government to promote trade with the UK.

The Paga Group has raised $34.7 million in funding so far, according to Crunchbase.