The last may not have been heard on the increase in the Land Use Charge recently announced by the Akinwumi Ambode-led administration of Lagos State.

Following the outrage on the insertion of Alpha-Beta-a company that has been helping the state to collect taxes since the era of Asiwaju Bola Tinubu, the House of Assembly has denied the engagement of Alpha Beta as a consultant in the new Land Use Charge payment. 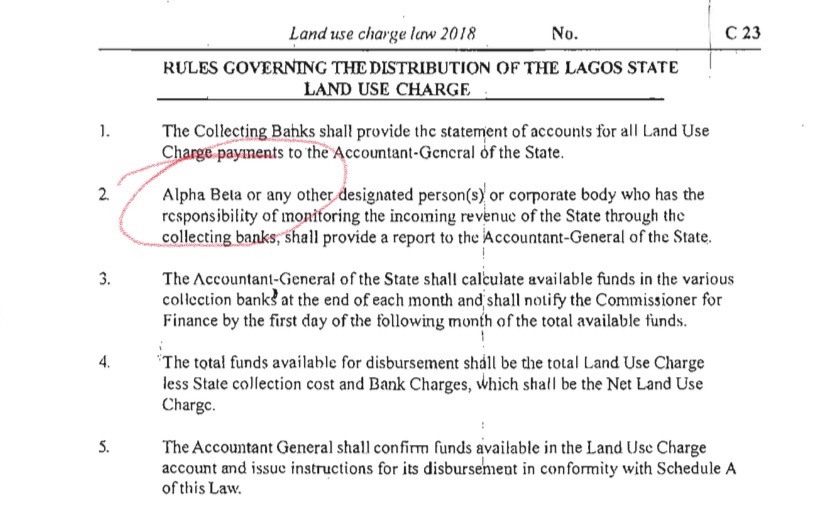 The Chairman of Assembly Committee on Information, Hon. Tunde Braimoh, agreed that Alpha Beta was mentioned in error, noting that the process of promulgating the new law “is not complete until gazetting when the official copy will be available and the law properly cited.”

Braimoh, therefore assured the state that the correct position “will be reflected before the law is gazetted. The process of gazetting itself is being expedited in view of these issues.”

However, the Ikeja branch of the Nigerian Bar Association has given the Lagos State Government a seven-day ultimatum to reverse the recent hike in the Land Use Charge. Adesina Ogunlana, chairman of the branch said that the association was ready to embark on a mass protest tagged, ‘Hell Tax Must Go’ against the new tax regime.

The chairman noted that the NBA was strongly opposed to the Land Use Charge, which he described as an “excessive and arbitrary tax regime” calculated at turning Lagos State into a “toxic environment and a living hell” for the residents.

Executive Chairman of the Lagos State Internal Revenue Service (LIRS) Ayodele Subair, in an interview with Thisday newspapers recently gave several reasons behind the sharp increase in Land Use Charges by the state. According to him, the sharp increase was largely due to the non-revision of the law in nearly two decades and the government’s need to raise revenue.

“Again, the land use charge has not been renewed for about 16 years. So, the government deemed it fit to try and review the law. In the past, a lot of properties were seriously undercharged; you could see a house on queens drive, Ikoyi, that is paying ₦18,000 and the house is worth probably hundreds of millions of naira or even billions.”

The State Government has also announced its readiness to dialogue in a bid to resolve the grey areas in the Land Use Charge. Noting that the state government has extended the period for tax payers to enjoy 15% discount in the reviewed Land Use Charge law to April 2018.

Importantly, LASG has extended the period for tax payers to enjoy the 15 per cent discount in the reviewed Land Use Charge Law to April 14, 2018.

LASG has reiterated that LUC is payable annually in respect of all real estate properties in the State, which means owners and occupiers holding a lease to a Property for ten (10) years or more are now liable to pay the annual LUC invoice charged.