Everything is relative: The Russia-Ukraine crisis

Everything is relative: The Russia-Ukraine crisis

In every contentious occurrence, the narration of events usually rests on the subjective interpretation of conflicting parties. For weeks now, tensions in Eastern Europe have held global headlines hostage, with fears of escalating tensions sending shivers down the spine of the global economy. In every true sense, everything is relative; hence, we would attempt elucidating the Russia-Ukraine crisis through the subjective lens of each nation, before delving into the potential impacts of further escalation on the global market. The Russian perspective – playing the victimDespite the prevailing rhetoric informed by Russia’s bellicosity around Ukraine’s borders, President Putin has insisted that Russia’s actions were informed by their national security concerns. Essentially, Russia is uncomfortable with NATO’s expansion and military deployments in Eastern Europe. For context, NATO, the North Atlantic Treaty Organization, was set up after world war two, with a core objective of presenting an integrated front against possible expansionism by the then Soviet Union. The political and military strength of NATO is enshrined in the principle of collective defense, as article five of its treaty stipulates that an attack against one NATO ally is considered as an attack against all allies. Back to Russia, the former Soviet nation has for long resisted the continuous expansion of NATO, particularly in Central and Eastern Europe. Yet, NATO has continued to grow its members, accommodating Eastern European countries, some of which are former Soviet Union members. Hence, in the wake of growing intentions of Ukraine joining the European Union (EU) and NATO, the Russians have expressed their security concerns regarding a restrictive western wall of allied countries, demanding that NATO halts its expansions, pulls back military deployments from Central and Eastern Europe, and eliminates the prospects of Ukraine or any other former Soviet countries joining NATO. Recall that in 2014, Russia invaded and annexed the Crimean Peninsula from Ukraine, and has now launched what the West is describing as a Full-Scale Attack on sovereign territories in Ukraine. 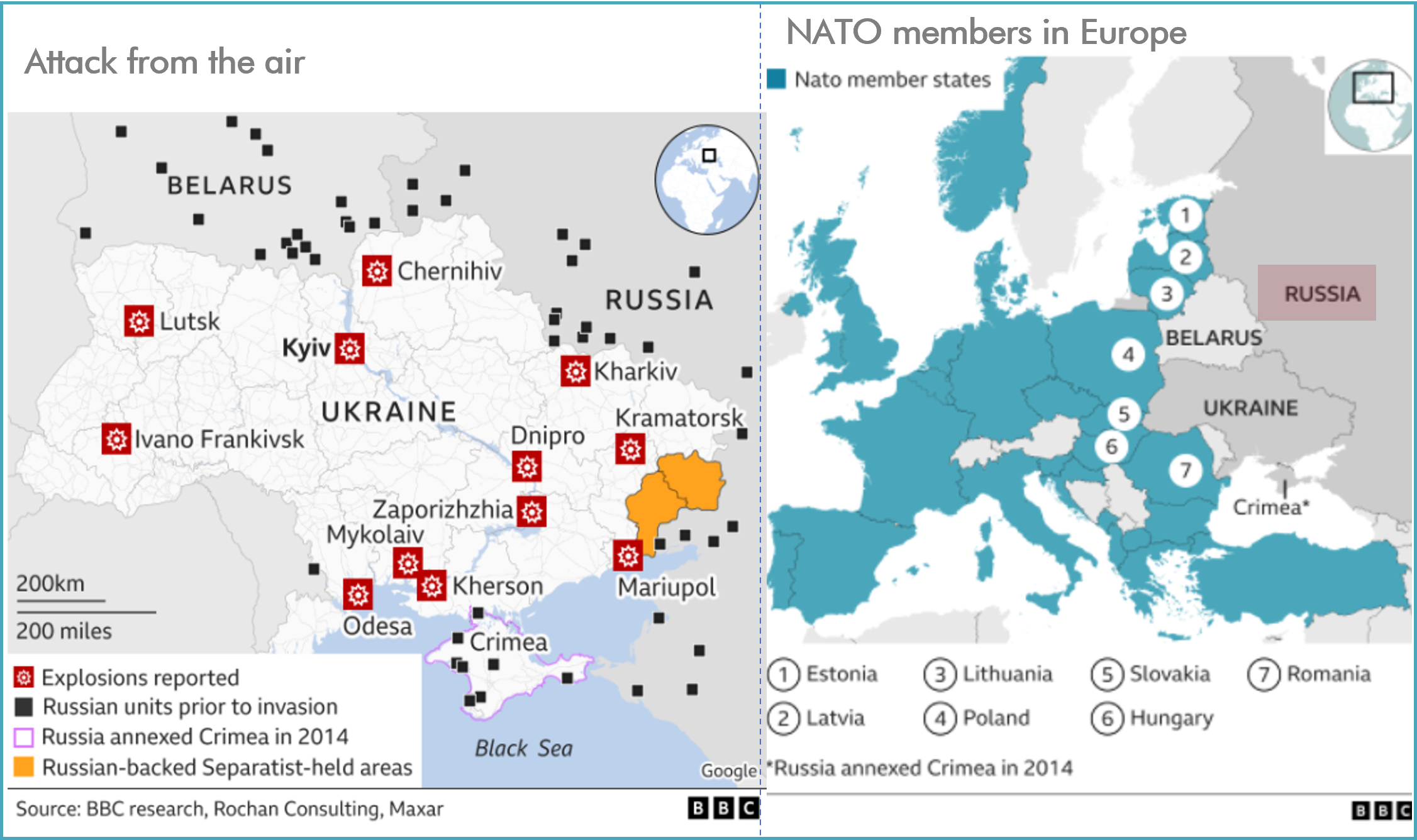 NATO and the West – taming a Russian overreachFor NATO, Russia is believed to still have an expansionary orientation, a process that it hopes to achieve with utter disregard for international laws. Hence, the requests by the former Soviet nation for NATO to reverse its open-door policy and withdraw military presence in Central and Eastern Europe have been unwelcome. Russia’s aggression towards Ukraine is being frowned upon by the West and its allies, as it could potentially disrupt the global economy, and also increase an already elevated toll of both military and civilian casualties that have ensued from the eight-year-long Russian-backed rebellion in Eastern Ukraine. However, the response from NATO is only limited to economic sanctions on Russia and providing financial support and military hardware to Ukraine. For the military deployments of the West, this has been largely steered to Baltic nations to deter further Russian adventurism. Also, in response to Russia ordering troops into the two separatist-held regions of Eastern Ukraine (Donetsk and Luhansk), NATO responded with the first tranche of sweeping sanctions aimed at Russian-linked banks, natural gas, and oligarchs. Specifically, the U.S. has implemented sanctions targeting two major Russian financial institutions, and also cut off Russia’s access to the Western debt markets, preventing the Russian government from trading and issuing new debts in the U.S. and European markets. Likewise, the U.K. introduced sanctions on five Russian banks, while the European Union took an identical approach.  For the Germans, the nation took the difficult step of halting certification of the 750-mile Nord Stream 2 gas pipeline that was expected to move gas directly from Russia to Germany. 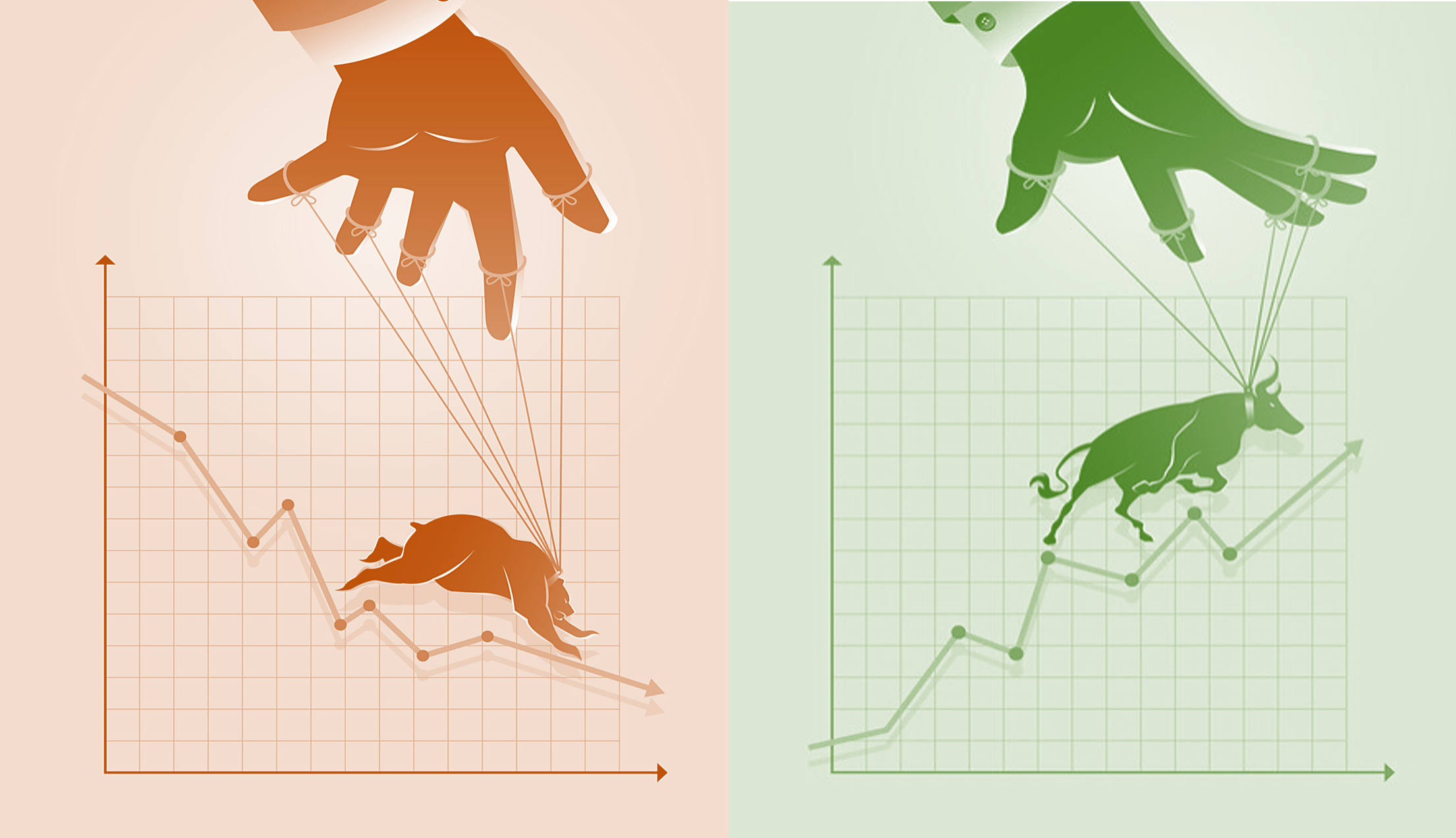 With each update on the Russian-Ukraine front and correspondence from the West, there have been conforming reactions in the global market. Headlines that insinuate the prospect of war in Eastern Europe have typically triggered selloffs in global stocks and digital currencies like cryptos., while safe-haven assets like U.S. Treasuries and gold have appreciated. Essentially, the market has no room to preemptively price-in expectations on this crisis, leaving the global market susceptible to the bias of each Eastern European headline. A bet on war is a bet on oilOn the commodity front, the major drama is in the international oil market. Russia was the single largest supplier of natural gas and oil to the European Union (EU) in 2021, as the EU imports around 40% of its gas from Russia. Disruptions in Russian oil supply to Europe has ignited concerns of supply shortages in the international oil market, and the sanctions from Germany halting certification of the Nord Stream 2 gas pipeline (expected to deliver 55 billion cubic meters of gas from Russia to Germany every year), basically exacerbates jitters around oil supply. As of print time, oil prices have soared past the US$100 per barrel mark. Looking ahead, the prospect of oil prices crossing US$110 per barrel is a distinct possibility, and the release of strategic oil reserves from countries like the U.S. would do very little to stem the uptrend in oil prices, as nations typically release oil reserves in a controlled manner. On the investment end, the spotlight should be turned to energy indexes and ETFs tracking crude oil and related stocks. A bet on war is a bet on oil.

Walking on eggshells – the market and policy trajectoryThe crisis in Eastern Europe will continue to dominate sentiments in the global market. As of print time, Russia had reportedly commenced its attacks on Ukraine, moving its troops into the country through the Donbas region, Crimea, and Belarus, with multiple explosions reported in many cities including the capital Kyiv. Basically, tensions have escalated, with NATO members starting internal consultations over Ukraine’s invasion, and have deployed the second tranche of sanctions on Russia.

For global stocks, the prevailing bearish bias could persist, and the selloffs may be worse than the 5.00% market correction seen in 2014 when Russia invaded Crimea. Similarly, the trajectory of prices in the digital currency space should continue trending southwards, as we continue to get more distressing insights into the Eastern Europe crisis. On the Eurobond front, sentiments will remain sour, as we are currently seeing declining investor interests. To typify, yields on the Ghanian Eurobond curve have surged past Covid-19 peak levels.

Treasury yields and gold are typical safe-haven investments during times of crisis; hence, we would expect to see interests steered to related assets.

On the U.S. policy end, the Fed might have to consider dialing back the number of rate hikes for this year, as such a contractionary measure would do very little to tame an energy-led price upsurge and push the economy into stagflation.Strategic direction – leveraging a crisisDespite the alarming rhetoric around the Russian-Ukraine crisis, there are still opportunities in the market. Every crisis usually presents an opportunity. To exemplify, the surge in SSA Eurobond yields during the Covid-19 pandemic eventually retraced. Hence, we see the best opportunities in SSA Eurobonds that are taking the most beating in this period. Particularly, we are currently seeing Ghana Eurobonds soar past the Covid-19 peak-yield levels, making for an attractive buy opportunity. 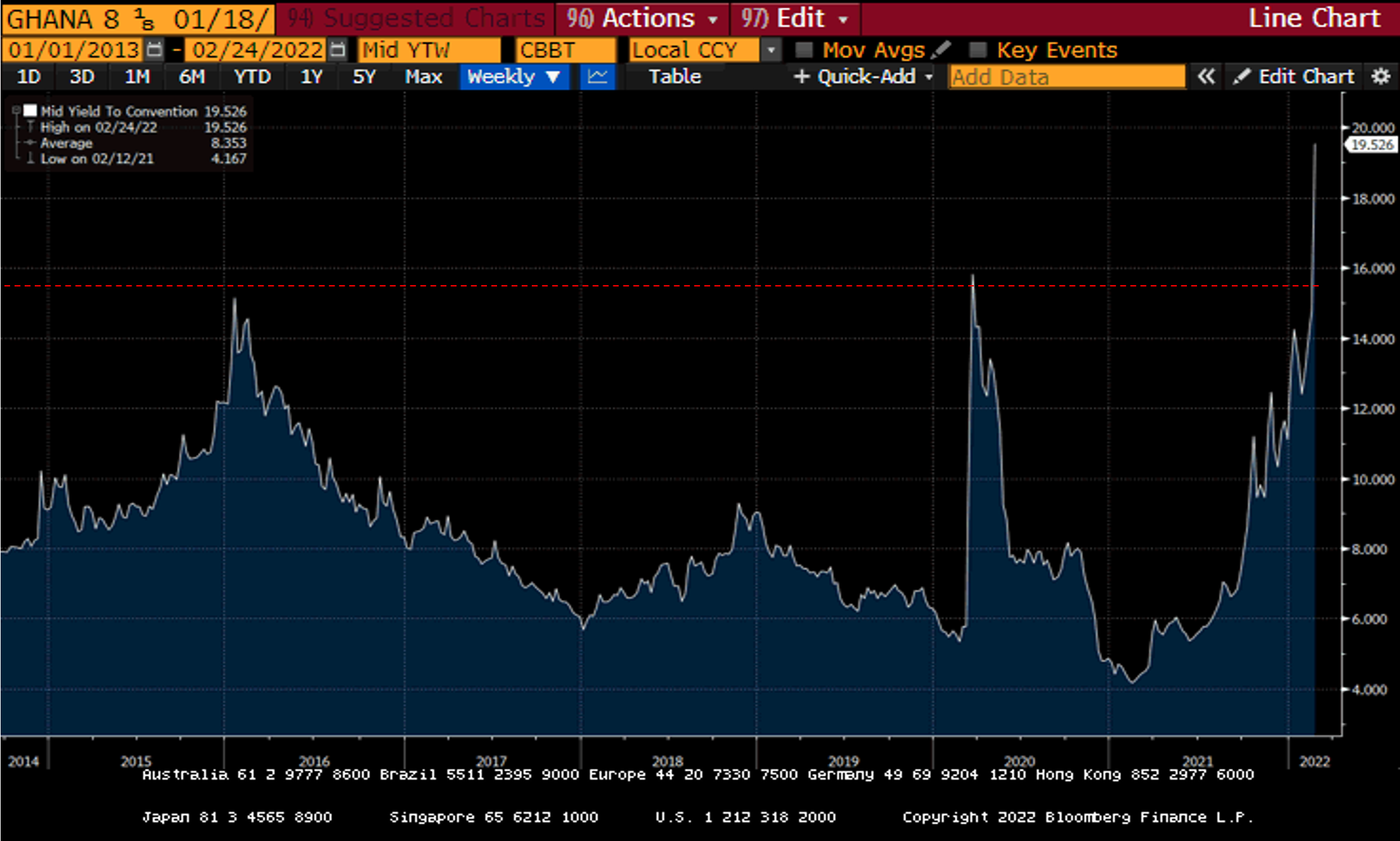 Similarly, risky assets like global stocks and digital currency are currently suffering a significant downtrend, sprouting attractive entry levels. Taking lessons from history, the invasion of Crimea by Russia in 2014 lasted between February and March, but the ensuing market decline was swiftly followed by a sharp rebound. To better illustrate, we have visualized the movements in the S&P 500 index during the 2014 Crimea invasion. Also, we provided a snapshot of the S&P 500 movements in periods of market shocks. NOTE: BUY THE DIP, BUT DON’T CATCH A FALLING KNIFE BY THE TIP. 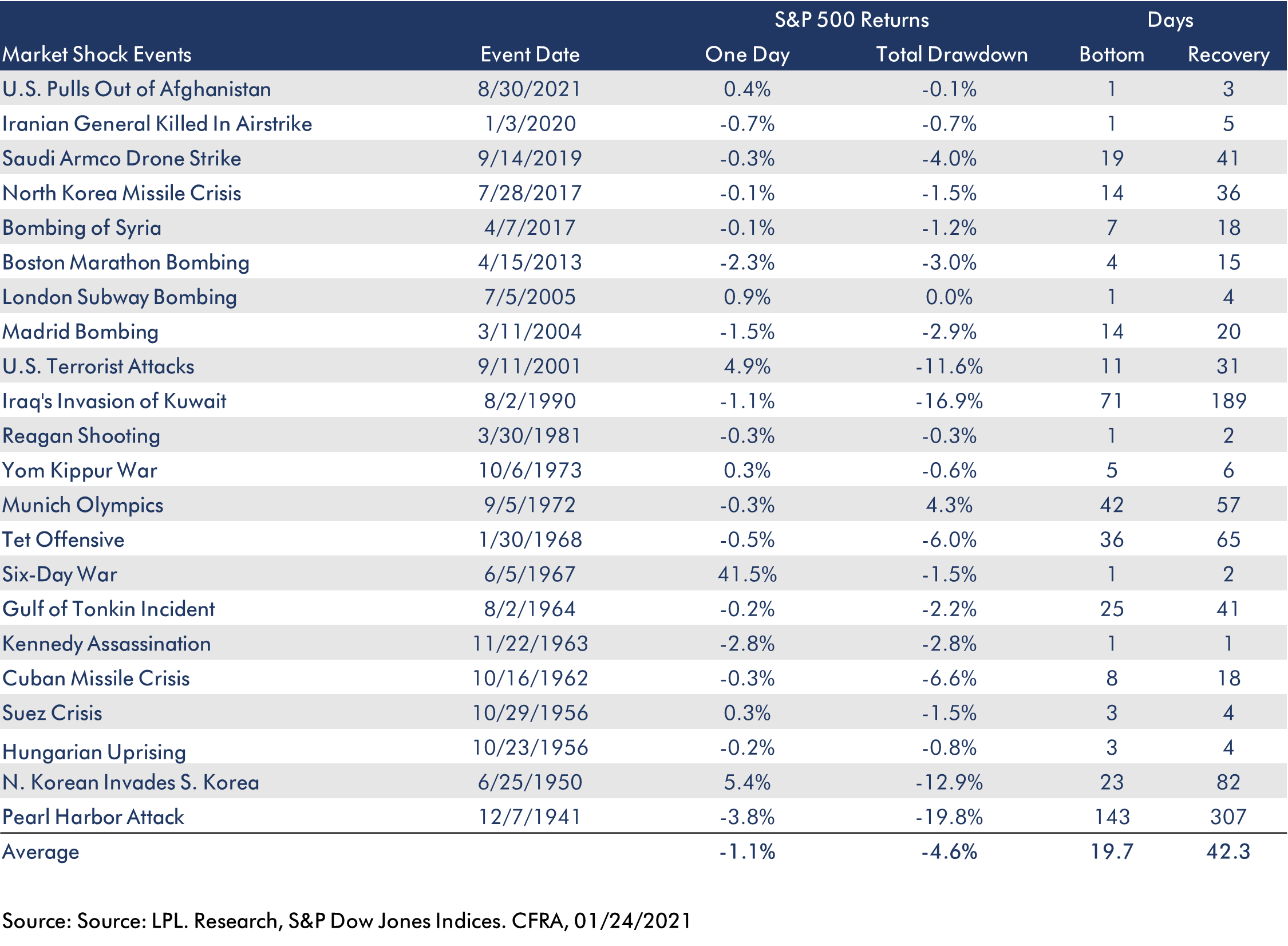