Gold gains for the 2nd consecutive week over inflation concerns

by Ajibola Akamo
in Commodities 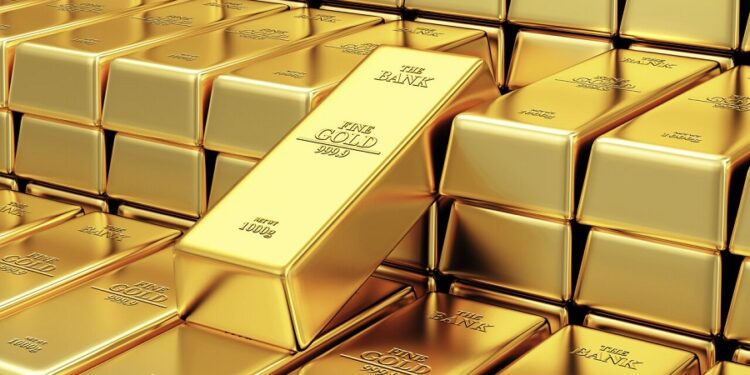 The yellow metal has posted its second consecutive weekly gain as it has exceeded most gold bears’ expectations. This comes after United States’ Labor Department reported a Consumer Price Index (CPI) of 6.2%, as investors scramble to invest in assets that are perceived hedges against inflation.

Gold closed the week trading at $1,867.85, as it posted gains for seven consecutive days, its longest stretch in the green since a previous run between the end of June and the first week of July. For the week, the yellow metal gained 2.81% after gaining 1.84% the week before that, trading a high of $1,871.35 during the week.

However, gold faces strong resistance as it tries to recapture the $1,900 trading zone and beyond. Phillip Streible, precious metals strategist at Blue Line Futures in Chicago stated, “What’s happening to gold is certainly great, but to me, the price still needs to get beyond $1,900 in order to establish its true cred as an inflation hedge.”

This week’s rally in gold came as the Labor Department reported that the U.S. CPI, which represents a basket of products ranging from gasoline and health care to groceries and rents, rose 6.2% during the year to October. It was the fastest growth of the CPI since November 1990, an acceleration driven mostly by pump prices of fuel running at seven-year highs.

Gold has always been touted as an inflation hedge. But it hasn’t been able to live up to that billing over the past year as incessant speculation that the US Federal Reserve will be forced in a faster-than-expected rate hike had sent Treasury yields and the dollar rallying instead at bullion’s expense.

That trend ended after Fed Chair Jay Powell assured earlier this month that the central bank will be patient with any rate hike that will only come after the middle of 2022 and most likely toward the end of the year.

Peter Schiff, CEO and chief global strategist of Euro Pacific Capital and a known Gold investor stated, “Inflation is going to help push the economy into recession. It’s a bunch of nonsense what everybody is saying about how inflation is a good problem, and it’s just a consequence of our strong economy. A strong economy doesn’t produce inflation. It actually produces the reverse, because a strong economy means that your economy is productive, you’re producing more goods and services, and you’re growing the supply. We have shortages because we have a weak economy.”

Rick Meckler, Partner at Cherry Lane Investments in New Vernon, New Jersey, stated, “Even though the Federal Reserve believes that inflation is transitory, the evidence is starting to add up that that’s not true. The Fed has made very few moves outside of what they’ve told the markets they plan to do, but I think even they’ve got to be a little concerned by the strength of the increase.”

Gold bulls are looking to the yellow metal to trade above the $1,900 trading zone, a zone that has not been traded since June 2021, to confirm a bull run in the yellow metal market is back in session.

Gold gains for the 2nd consecutive week over inflation concerns