Why building collapse incidents may persist in Nigeria

by Abiola Odutola
in Real Estate and Construction, Spotlight 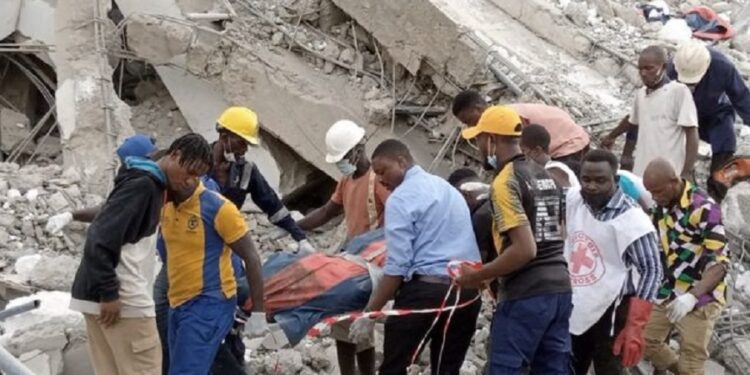 About a week ago, residents of Lagos suffered a ‘Black Monday’ after a 21-storey building under construction (on Gerald Road, Ikoyi, Lagos) collapsed, claiming over 40 lives including the owner, his aides and other workers on the construction site.

Though this is not the first time the state will witness a building (both under construction or completed) collapse, building and real estate experts believe that the malady persists because nothing has been done to address its root causes.

What experts are saying about building collapses

The immediate past Chairman, NIESV, Dotun Bamigbola, told Nairametrics that building collapse may persist in the country if the government does not scrutinize who is involved in the construction of buildings and find out if they are certified professional builders or not.

“As long as the government, both at the State and Federal level, through agencies, fail to check this, more non-professionals will continue to build, thus endangering the lives of Nigerians,” he said.

He explained that there are well-trained and certified professional builders, who are part of the 7 built-industry professional bodies under the Nigerian Institute of Building (NIOB) and these professionals are under oath to protect their professional integrity.

“At the same time, there are non-professionals builders who do not have the skill set of the certified builders and may not be bound by anything except the contract they are involved in. Some developers choose to engage non-professional builders to cut costs on their projects, which can portend danger in the long run.

Bamigbola further listed factors that can lead to building collapse, citing the use of substandard or compromised materials, failure to comply with existing building regulations, poor workmanship and soil movement or displacement. He stated that quacks and non-professionals are almost always guilty of the human elements of these factors.

Speaking on the Nigerian Building Code bill, which has interestingly been with the National Assembly for 10 years, Bamigbola explained that the bill’s passage will go a long way in curbing building collapse across the nation. He, however, acknowledged that the Lagos State government already has some set of building regulations that, if strictly adhered to, can prevent or limit the incidents of building collapse in the state.

“The problem mainly is implementation and enforcement on one part, as well as the problems of failure to use professionals and quality materials. If developers, the government and the professionals can overcome these challenges in the sector we should have a better outlook on building collapse,” he said.

NIoB agreed with Bamigbola on the need for the National Assembly to expedite the passage of the National Building Code Bill to check frequent building collapses in the country.

The Institute, through its Chairman in Lagos, Lucky Isename, asked the Lagos State Government to engage teams of independent professionals as building inspectors.

According to him, the inspectors would monitor numerous construction sites in various localities across the state. He also agreed that the speedy passage of the Building Code Bill would ensure that professional builders work on sites, adding that no professional would want to lose his or her certification.

“We commend the Lagos State Government for domesticating provisions of the Code in its building control laws but the government needs to collaborate with professionals in the built environment to effectively implement the laws. The state government lacks adequate manpower to tackle infractions of building control regulations,” he said.

Isename noted that the state government’s building monitoring agencies, in particular, had become short-staffed adding that this was also affecting effective supervision of numerous construction sites all over the state.

He called for strong synergy between the Ministries of Works, Environment and relevant professional bodies in supervising construction sites and ensuring that the right professionals are used.

He also advised professionals in the building industry to operate within their boundaries given the interwoven roles of various experts to ensure they construct quality buildings.

“Different professionals are supposed to perform different responsibilities during construction, but there are instances where an architect, for example, wants to do the job of both an engineer and a builder.

“From the rubbles of the collapsed building, it is clear that the materials are substandard and there was poor supervision, bringing me to the question, were professionals employed?

“I also notice that apart from the refusal of people to pay professionals, our building materials are also substandard. You can hardly get two-by-two planks with correct measurements on our sites.

“The sizes and quality of our rods are substandard, a lot is being compromised in terms of size and quality. The challenge is so huge that it needs to be checked from the roots, including the production of our woods, rods, and cement among others,” he added.

Though the Governor Babajide Sanwo-Olu led-administration has assured residents that it will ensure justice prevails and the culprits are brought to book, Nigerians are currently watching with folded arms as not much has been heard about what both the State and Federal governments are implementing to curb the menace.

Going by previous incidences, the government has been reactive and not proactive; a development many believe may persist till there is a political will to address issues as advised by the experts.