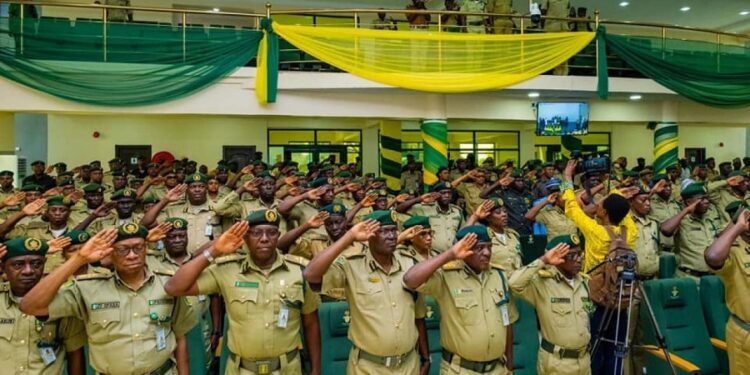 This was disclosed by Haliru Nababa, Controller General of Nigerian Correctional Service, at the “Prison Reforms and National Security” webinar organized by the Nigerian Economic Summit Group on Thursday, to discuss ways to improve and rehabilitate the lives of inmates and convicts in Nigeria and also Nigeria’s general fight against insecurity.

The CG stated that “Transition is fundamental” citing that apart from changing the name from prison to correctional services, custodial and non-custodial services were set apart.

He mentioned non-custodial changes with the Act which includes the appointment of a Controller General of corrections, with criteria including expected qualifications. He also stated that under the new law, sections of custodial fellows includes taking custody of all persons legally interned, conveying remanded persons from and to courts, identifying the existence of anti-social behaviour of inmates with appropriate measures for rehabilitation and programs for reintegration back into society.

“The Act addresses the issues of taming overcrowding, for example, where the custodial centre exceeds capacity, the state comptroller must alert the FG, and notified body will take 3 months to solve issues,” he stated.

On the death row policies of the Act, he said the new act brings hope to inmates on death row, helping them deal with mental torture, however, “section 12 says where an inmate exceeds all legal proceeds after ten years, the chief justice will commit the trial to life in prison.”

“The act also addresses issues of stigmatization, as trained offenders who show a certain level of competence are issued certificates to enable them reintegrate into society,” he said.

He stated that funds appropriated for feeding have to be reviewed every 5 years according to economic lines as well as facilities for female inmates in all states. The nutritional needs of all female prisoners were also being taken into consideration. On the issue of the reformation of inmates, he said the NCS has procedures put in place to see to the reform of inmates through formal education programmes (WAEC and degree programmes), citing that so far 5750 were enrolled for adult education and over 3000 have graduated.

“Under the current admin, more inmates have attained education degrees and studying even law, and about 85 are currently doing their post gradates degrees,” he said.

He also mentioned challenges, which include lack of operational vehicles, and infrastructure deficit, adding that the FG has approved the rehabilitation of prison facilities.

On the way forward, he said the domestication of the criminal justice act in the states should be strengthened as this accommodates for speedy trials and treatment and rehabilitation of inmates through vocational and education of inmates.

The DCG also revealed that the ratio of convicts to inmates in Nigeria is over 70% of the prison population awaiting trial, citing over 70,000 people in prison.

“Difference between an inmate and convict, anyone can be an inmate, inmates are those in custodial facilities and mostly not been sentenced, awaiting trial, and you cannot subject them into reform because he is considered innocent until sentence,” he said.

Ms Aladesanmi Joke, Executive Director, Centre for Legal Support and Inmate Rehabilitation, said the Act is broad enough and looks into issues of rehabilitation but the question remains “how effective is the implementation?” She also revealed that there is a 65% chance that an inmate going to trial will be returned to prison.