Apple became the first company to cross $2 trillion after riding on a wave of positive market sentiments that has trailed the United States since the Trump Administration pumped in trillions in stimulus in response to the Covid-19 pandemic that shut down the economy of the richest country in the world.

The United States S&P index which Apple belongs to has hit an all-time high this week clawing back all the losses incurred in the Covid-19 pandemic. Apple’s surge is significant particularly as it demonstrates how much demand has flowed into tech stocks in recent months from not just the US but all over the world.

What this means: By crossing $2 trillion, Apple continues to lead the world in market valuation and returns. It also demonstrates the confidence investors have in the ability of Apple to continue to sell more iPhones, MacBooks, and accessories. The valuation might fall below $2 trillion however now that it has crossed this ceiling it is only likely to surpass it in the coming weeks and months. This is a day by day account of the #ENDSARs protest since it started from October 3rd. 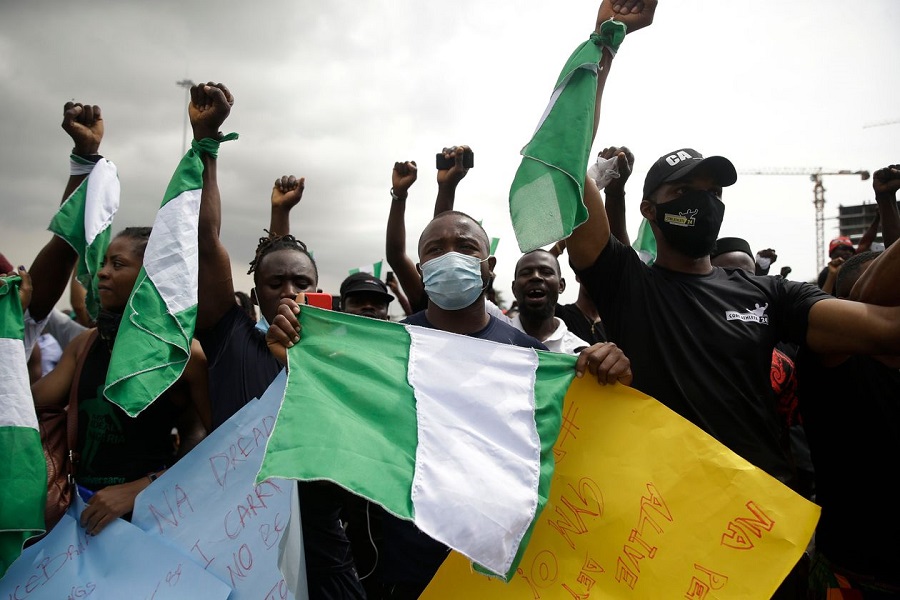 Nigerian youths embarked on a peaceful protest tagged #EndSARS to demand the disbandment of the Special Anti-Robbery Squad (SARS) unit, as well as, other reforms in the Nigerian Police Force (NPF). What started out as a peaceful demonstration by thousands of youths, degenerated into chaos after the protests were hijacked by hoodlums.

The Birth of #EndSARS

The #EndSARS movement dates back to 2017, where Nigerian youths used the hashtag to share their experiences on violence and assault perpetrated by the defunct Special Anti-Robbery Squad. However, the movement only revived in early October, after a video emerged of police officers thought to be members of the SARS unit, allegedly killing an unarmed young man.

This prompted Nigerian youths to troop to Twitter, calling on the Federal Government for police reform with the hashtag, #EndSARS, #Endpolicebrutality, and many more. The hashtag trended continuously on Twitter as Nigerian youths aired their pain and experiences online.

Nairametrics captured the timeline of notable events from the moment it all began to the latest developments.

Note: This timeline is updated daily.

Tayo Oviosu, the journey from Software Engineer to Pagatech

Our focus for this week’s profile is Tayo Oviosu, founder and CEO of notable payment solutions provider, Pagatech. Global trends in recent times have shown a shift towards a cashless and digital economy, especially as it becomes more obvious that operations in physical branches of commercial banks can be summarily shut down when circumstances demand it.

Our focus for this week’s profile is Tayo Oviosu, founder and CEO of a notable payment solutions provider, Pagatech, the startup that blazed the trail for others in the space. Though there are now over 200 fintech players, Paga still holds its ground.

READ: Paga records over $2 billion worth of transactions in 2019

Eyitayo David Oviosu was born on September 10, 1977, and acquired both his primary and secondary education in Nigeria. He left for the United States of America in 1994 and bagged his first degree in Electrical Engineering from the University of Southern California in 1998. He later earned a Masters in Business Administration from the Graduate School of Business, Stanford University from 2003 to 2005.

Schooling was not a smooth ride for Tayo as he had to work his way through, sometimes keeping as much as 5 jobs in order to stay afloat. He also had hard times with courses like Semiconductor Chip Design, which he admitted was one of his toughest courses, as he hardly aced it despite his love for the subject.

Attempting to break a rock

Fresh out of school, he opted to take the same Semiconductor Chip Design as a career option in Biomorphic VLSI, a startup of 8 employees, hoping to get better at it with more practice. The young Tayo worked weekdays and weekends trying to get a hang of the task before him.

“I was allowed to design a digital imaging chip that got sent to Taiwan for fabrication. I had tested this thing numerous times in the lab; I was confident it was going to work. Then the fabricated chip comes back and it doesn’t work. I was devastated, we spent a lot of money shipping between Los Angeles and Taiwan,” he once recounted.

READ: Contracts less than N5 billion will no longer be awarded to foreign firms – FG

Having caused the company to spend so much for nothing, he was fired from the job.

“I got called into my boss’ office and he told me he had to let me go. I cried right there. This was my first job out of college and barely 3 months in,” he said.

Though unhappy at the time, he later came to appreciate how the job loss pointed him in the right career path and pushed him out of a line where he would have continued struggling to keep up. In the subsequent months, he survived on the unemployment benefits he collected from the state of California, before getting a job in a mail-room and then a call center.

He eventually got a job as a Software Engineer for another startup in Los Angeles, before he moved to Deloitte Consulting in the CRM and Technology practice as a Senior Consultant.

After his MBA, he worked as Manager Corporate Development with Cisco Systems in San Jose California, where he was responsible for strategy, acquisitions, and private equity investments in a few segments and led Cisco’s investment expansion in Africa with investment opportunities. He became Vice President at Travant Capital Partners in Lagos upon his return to Nigeria and remained there till 2009.

Moving towards a cashless economy

In 2009, Tayo founded Pagatech as a mobile payments solution focused on digitizing cash amidst new emerging economies. Even while working at the call center, Tayo had always thought that he would return to Nigeria at some point to help make it great again. For Tayo, founding Pagatech was all about addressing two challenges – the excessive use of cash, and limited financial access in Nigeria. He wanted to help Nigerians pay retailers, make purchases, and pay utility bills without having to handle so much money.

Such innovation was not common at the time, as Nigeria was still very far from toeing the lines of a cashless economy.

READ: FRC orders banks not to lend money to states without approval

Having worked for over a decade, Tayo had saved up some money and had the support of friends, which became instrumental in launching Paga. “I was also creative in terms of how I spent the money. I pooled together people to work in different aspects, most of them friends who were doing it as a favor. Everyone who helped us in the early days got paid below the market rate. Some of them stayed on to work with Paga when we could afford to pay them at market rates,” he recalled.

For the first 6 months, Tayo bootstrapped from his personal funds before setting out to raise funds from investors. It was a journey where he first had to show investors how feasible the business idea was before letting them in.

Some of the initial investors who took the risk to put their funds in were Goodwell Alitheia Capital, Tayo’s former bosses, both in Nigeria and Los Angeles, and some friends and relatives – the result of lots of goodwill built over the years.

Pagatech reached its first 1 million users within 2 years and since then, the number of its users has grown into tens of millions processing billions of dollars in transactions. Pagatech has also partnered with the apex bank (Central Bank of Nigeria) on the Shared Agent Network Expansion Facilities initiative (SANEF) to grow the reach of agents providing financial services to 500,000 in order to ramp up inclusion for all Nigerians.

Tayo Oviosu has now become an angel investor in other startups.

“When I look at my journey so far, I realize that we are here sitting on the back of 34 people and 6 institutions who took a bet on us on. So I similarly want to find ideas to invest in. I don’t have a lot of money but I want to find people who I can make those kinds of investments and bets as well,” he said.

He has dreams of dual-listing Paga on the NSE and NASDAQ in the nearest future.