A shocking leap in America’s job numbers for last month pushed gold into a bearish mode, as it fell below the $1,700 mark.

The May job report dumbfounded economists who had forecast a job loss of 8 million in May as the COVID-19 pandemic rattled parts of the U.S. economy negatively for a third straight month.

“Gold traders rushed for the exits after they were stunned by the robust nonfarm payroll report,” said Ed Moya, analyst at New York’s OANDA told Reuters.  “It will be hard for the Fed to remain extremely accommodative if the world’s largest economy is already in recovery mode,” he added.

Why invest in gold? Humans mainly use gold for making jewelry, physical coins, and recently, for industrial purposes such as in the production of electronics. However, it is rare enough that many people don’t have it, or have it in minute quantities. Humans are emotionally and physically drawn to gold. It provides a significant store of value. Investors buy gold to hedge against inflation.

In addition, America’s Federal Reserve, the Congress, and U.S. Treasury have collectively approved and disbursed trillions of dollars in outright aid to businesses, and grants and loans to individuals in recent weeks because of the COVID-19-triggered economic downturn.

“I expect a return by next week to the basics of global economic recovery, before more headlines on Middle East worries, China-U.S. tariffs, debt and creeping — not negative interest rates — give gold a leg up,” said George Gero, managing director in charge of the precious metals portfolio at RBC Wealth Management in New York.

Moya added that, “Gold might not get much more support from the Fed, but geopolitical risks, second wave concerns, and an eventually weaker U.S. dollar should keep the longer-term bullish outlook intact.”

Best Pension Funds in Nigeria for the month of March 2021

Nigerian Pension Fund administrators in the month of March 2021, recovered from the downturn recorded in February to post marginal growth. Nigerian pension funds asset recorded tepid growth in the month of March, recovering marginally from the negative growth recorded in the previous month, as 81.25% of the total funds recorded positive growth against 22% recorded in February.

A cursory look at the data revealed that the RSA Fund IV on average performed the best in March, followed by RSA Fund III, while RSA Fund I remained flat in the review month.

Nairametrics considered the prices of the different RSA funds as of 28th February 2021 and compared them with the prices as of the last day of March (31st March 2021).

Below is a list of the best-performing funds in March

This fund has the highest allocation of risky or variable income instruments and participation is strictly upon a formal request from a contributor. The RSA Fund I is suitable for people who want to invest in high-risk instruments with higher rewards. Hence, contributors who are 50 years and above cannot apply to be moved into this fund.

According to available data 9 of the funds recorded positive growth in the month under review, as against 1 recorded in the previous month.

It is noteworthy that Investment One Pension Managers and Veritas Glanvills Pensions were not included in the analysis, as their information could not be obtained, as at the time of writing this article. Considering the aggregate performance of the fund, it stood flat at 0%.

This fund is balanced and suitable for middle-aged contributors as well as those with a medium risk appetite. It is designed to be less risky with reduced allocation to variable income instruments compared to Fund I. The age requirement for participation is 49 years and below.

Of the 20 funds considered in the analysis, 16 recorded positive growth in value, representing 80% of the total. Meanwhile, it is noteworthy that as with the case in the RSA fund I category, Investment One Pension Managers and Veritas Glanvills Pensions, were not included.

In this category of funds, all the pension funds posted positive growth in the month of March, with the exception of Investment One and Veritas Glanvills, which were not included in the analysis. The aggregate RSA Fund III, appreciated by 0.47% in March 2021.

The RSA Fund IV is exclusively for retirees. In the month of February, of all 22 Pension Fund Administrators, 10 of them recorded positive growth. However, they were all marginal growth of less than 1%.

Similarly, as witnessed in the RSA Fund III category all but AIICO Pension Managers recorded positive growth in March 2021, a recovery compared to the previous month. In terms of the aggregate performance, RSA Fund IV grew by 0.5% in the month under review.

According to the monthly report from the National Pension Commission, the total Pension Fund assets declined in the month of February 2021 from N12.3 trillion recorded as of 31st January 2021 to N12.25 trillion. This could be attributed to the bearish performance of the various funds in February 2021. 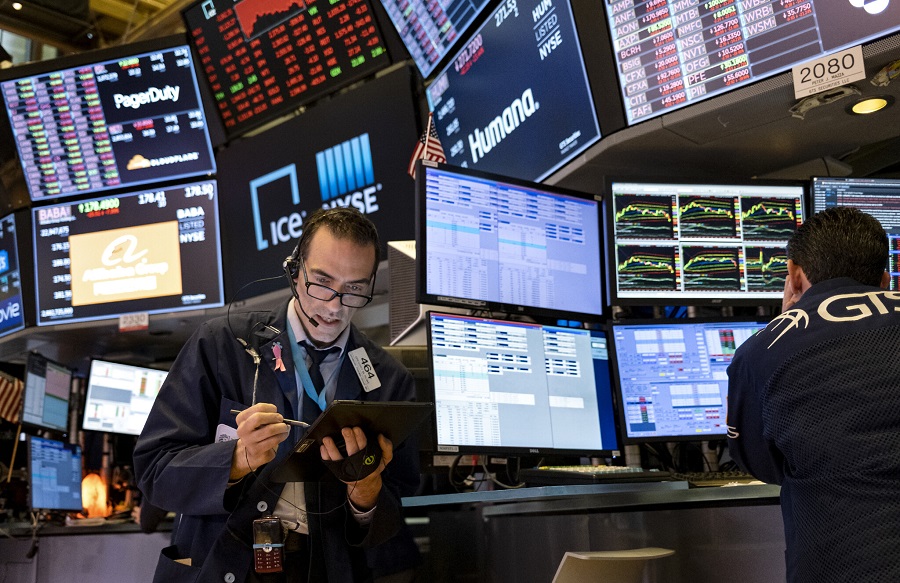 Stocks soared to new highs on Thursday, as investors awaited a far stronger-than-expected reading on consumer spending and a dramatic drop in the number of new jobless claims.

Retail revenues increased by 9.8%, with stimulus checks and lowered social distancing expectations contributing to the increase. Nasdaq surged (+1.31%) at the end of the trading session. The S&P 500 increased by (+1.11%). The Dow also made a gain of (+0.90%).

Treasury Yields fell. Retail sales increased to their highest level since May 2020, in March.