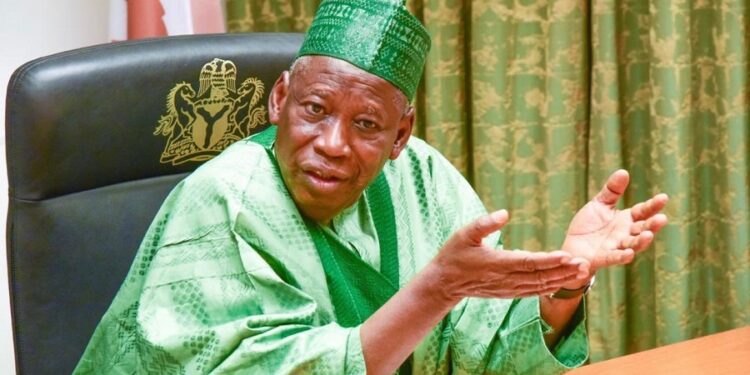 The Governor of Kano state declared that due to the size of Lagos and Kano states, both states are demanding 1% in Nigeria’s new revenue allocation formula and have submitted proposals to the federal government.

This was disclosed by Governor Abdullahi Ganduje of Kano State, in a statement signed by the Chief Press Secretary (CPS) to the governor, Mr Abba Anwar, issued on Tuesday in Kano.

Both Governors discussed this proposal in a meeting with the Lagos State Governor, Babajide Sanwo-Olu, during a condolence visit over the death of Aliko Dangote’s brother, Sani Dangote.

What the Kano State Governor said

“Looking at the population size of Kano and Lagos states and other similarities of megacities, both states demand 1 per cent in the new nation’s revenue allocation formula. We have already made our submissions,” Ganduje said.

He also added that both states also have 24 legislators, each, in the House of Reps and were megacities, adding that: “While Lagos is the most populous city in Nigeria and in West Africa, Kano is the second after Lagos. We have similarities and we also have the same problems.

“Problem of managing population, problems of providing social services to people, and you cannot determine who will use your facilities, your services because people are coming into our cities for almost 24 hours.

“Every second, people are entering the two cities of Kano and Lagos, and you have no control over that. They also have to get security services.”

He added that since there is now an attempt to review the revenue formula in Nigeria, Lagos and Kano are demanding 1 per cent, which will enable them to take care of the circumstances of megacities.

Recall Nairametrics reported last month that North Central stakeholders proposed a 39:35:26% revenue sharing formula for the three tiers of government in the country.

Kogi State Governor, Yahaya Bello said, “We can no longer deny that a comprehensive review of RAF currently in use in Nigeria has become overdue.

“The nine oil-producing states receive an additional 13 per cent as derivation revenue which is distributed among them depending on the actual contribution of each to crude oil receipts.

Nairametrics also reported earlier that the Lagos State Governor, Babajide Sanwo-Olu called for a 42% revenue share model to states from the Federation Account, during a two-day South-West Zonal public hearing on the Review of Allocation formula by the Revenue Mobilization Allocation and Fiscal Commission (RMAFC).