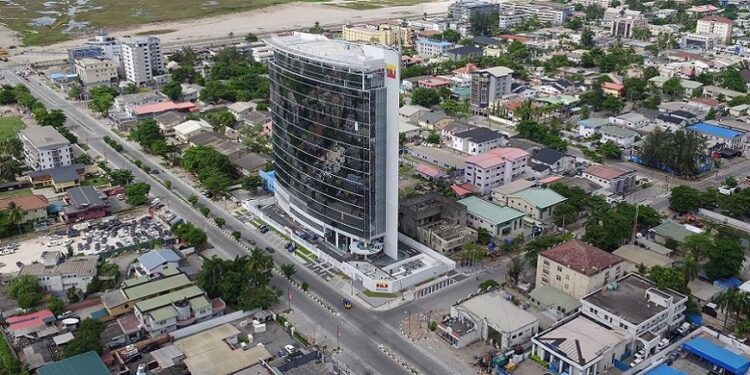 Victoria Island is the commercial core of Lagos, and home to a significant number of multinational firms, large indigenous companies and a host of small Nigerian businesses. Though it is known for being one of the regions with the most business activity in the country, it was once entirely a residential region. Decay in what was the former Central Business District in Lagos Island led to a gradual but mass migration of businesses from Lagos Island into Victoria Island.

Just like Lagos Island, Victoria Island borders the Atlantic Ocean to the south as well as other creeks and lagoons, providing a lagoon view for most of the high rise projects within the neighbourhood. Victoria Island has direct access to Lekki Phase 1, Lagos Island, and Ikoyi and also houses a handful of  embassies including the United State Embassy. Major office developments in Victoria Island include: The Wings, Civic Tower, Nestoil Tower, Churchgate Tower I,  Churchgate Tower II, Standard Chartered Bank HQ Building, etc. The residential turned commercial neighbourhood sits adjacent to Eko Atlantic City where the New US Consulate General Office is located alongside other notable projects .

Over the years, Victoria Island has maintained its reputation as a major commercial hub, attracting some of Lagos’ top office developers including RMB Westport (Now Lango Real Estate Limited) who were the developers of The Wings Towers, the Chagoury Group who developed C & C Towers, Pier Point who are the developers of Pier Point Tower, Churchgate who also developed Churchgate Tower I & Tower II, including Quantum Capital and Nestoil Group who also developed Civic Towers and Nestoil Towers respectively. The region has also seen some of the A grade contractors such as Julius Berger Nigeria Plc, I.T.B Nigeria, and Cappa and D’Alberto Plc coming to execute most of the prime builds.

Estate Intel is currently tracking 371,762.47 sqm of completed stock, with 97,603 sqm of office space in the pipeline in Victoria Island. Based on the data that we have gathered, the average rent for grade A+ office in Victoria Island is $500/sqm/annum (N182,500/sqm/annum) and constitutes 4.2% of the total stock compared to Ikoyi where the grade A+ rents fall around $690/sqm/annum (N252,137/sqm/annum), and constitute over 35.7% of the stock. Based on the data we have tracked historically for the Victoria Island office market including rents, pipeline stock and occupancy rates, etc., we believe the market direction over the next few years is neutral.

Click here to read the Victoria Island Office Market Analysis, which gives a more in-depth analysis of other market data that we track including; sales and rental rates, yields, supply drivers, stock breakdown, occupancy rate, and information on key contractors who are active in the market.

What are your thoughts on the Victoria Island office market?

Let us know by sending an email to [email protected]