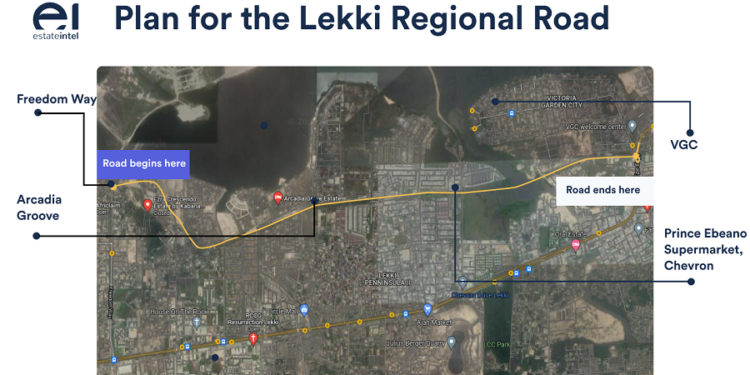 In May 2020, the Lagos State Government under the leadership of Governor Sanwo-Olu kicked off the construction of the Lekki Regional Road in Eti-Osa Local Government. The 8.75km road will link Freedom Way to Victoria Garden City (VGC), with the aim of decongesting the Lekki-Epe Expressway.

It will take 22 months to finish, and is expected to be ready by April 2022

The project was awarded to the Contractor at the end of May 2020, and construction commenced in June same year. The State Governor, Babajide Sanwo-Olu mentioned that the project will take about 22 months to finish. Based on this timeline, completion is expected during April 2022 and is meant to set the base for the 4th Mainland Bridge construction, which is expected to commence the same year.

Although the cost of the project is not disclosed, the 8.75km road will be built on a 45 meter wide Right of Way (RoW) with at least 3 bridges and 15 drainage channels for water disposal. The Special Adviser to the Governor on Works and Infrastructure, Mrs Aramide Adeyoye, further explained that the project will also feature an additional 500-meter bridge, 251-meter interchange, 50-meter bicycle lane, and an adjoining 500-meter road.

The plan for the regional road is not new to Lagos but has been in the Lagos Metropolitan Masterplan since 1982. It was also retained in the approved Lekki Comprehensive Master Plan in 2013, even though the State has not had it on the front burner.

The plan shows that the road will stretch from Freedom Way in Lekki Phase 1, through Chevron Drive, to VGC. We expect that those estates within the alignment will see some value increase resulting from the road project. These estates include:

Other Estate along the same corridor that will see some potential value increase as well includes:

Infrastructure is key to real estate development and is a major growth driver for cities in general. Although projects like the Lekki Free Trade Zone, Lekki Ports, Dangote Petrochemical Plant, Lekki Airports, etc, will boost the economic impetus of the region, road and other alternative transport infrastructures are even more imperative. As the road nears completion, we expect that it will encourage even more developers and landowners to build along the Lekki-Epe axis.

One of the most exciting impacts that the Lekki regional road will have is that it will reduce the pressure on the already congested Lekki-Epe Expressway. This, in turn, will boost real estate activity in the region and make the region even more appealing to real estate investors.

We are excited to see the growth that will ensue over the next few years. Let us know in the comment section, how you think the regional road project will impact the commercial real estate development along the Lekki-Epe corridor.