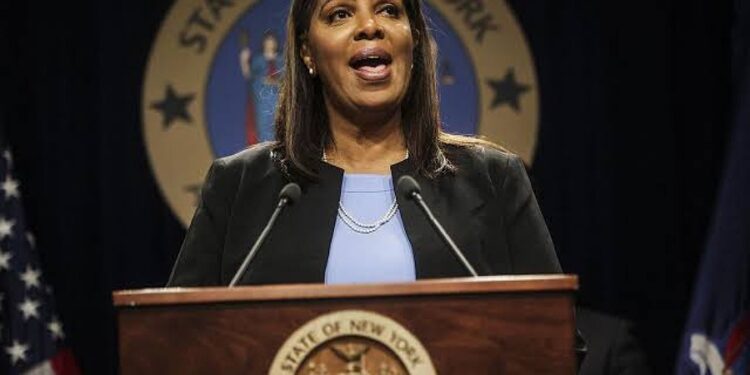 New York Attorney General, Letitia James, has ordered two unnamed crypto lending platforms operating in the state to shut down their activities, citing that these platforms have engaged in unlawful activities.

The NYAG has also ordered three others based in New York, whose names have been deleted, to give information on their lending products, policies, procedures, clients in the state, and other pertinent information.

What NYAG is saying

For the purposes of the Martin Act, cryptocurrency is classed as a security, and therefore subject to its provisions.

According to the press release, James stated, “Virtual or “crypto” currency lending platforms are essentially interest-bearing accounts that offer investors a rate of return on virtual currencies that are deposited with them. In New York, these lending platforms must register with the Office of the Attorney General (OAG) if they are operating within the state or offering their products to New Yorkers. Today, Attorney General James directed two of these lending platforms to immediately cease their unregistered and unlawful activities in New York and directed three other platforms to immediately provide information about their activities and products.”

“Cryptocurrency platforms must follow the law, just like everyone else, which is why we are now directing two crypto companies to shut down and forcing three more to answer questions immediately. My office is responsible for ensuring industry players do not take advantage of unsuspecting investors. We’ve already taken action against a number of crypto platforms and coins that engaged in fraud or that illegally operated in New York. Today’s actions build on that work and send a message that we will not hesitate to take whatever actions are necessary against any company that thinks they are above the law.”

The request for information from the three companies was not legally binding, but the NYAG’s office left the door open to serving a subpoena in the letter. The order to shut down operations is backed by the state’s Martin Act, which grants the AG the enforcement power to bring civil or criminal charges against unregistered securities offerings.

This action isn’t the first of its kind. In February, the Attorney General announced an agreement with Bitfinex, Tether, and related entities that ended all of their trading activity in the state of New York and imposed an $18.5 million penalty on the companies and increased transparency.

In September, the New York Attorney General’s office ordered crypto investment platform Coinseed to close its doors after allegedly defrauding investors out of more than $1 million and selling an unlisted token. Coinseed has been told to permanently halt its operations and pay $3 million in fines.

Under current New York state law, all crypto brokers, dealers, salespersons and investment advisers must register with the NYAG’s Investor Protection Bureau if they are doing business in the state. Those without an exemption who fail to do so will be subject to civil and criminal penalties.