5 things the Abia State Government should be thinking seriously about

by Kalu Aja
in Business, Spotlight 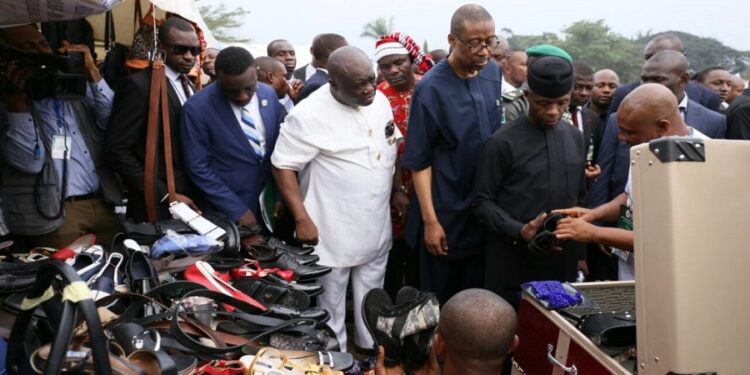 There are many good things to celebrate about Abia State, e.g., Abia has stayed constant in WAEC performance…Abia has always been among the top three states with WAEC pass rates. Enyimba of Aba won Nigeria’s first and only Champions League Cup twice.

“Aba-made” goods, i.e., SME manufacturing in Abia, Nigeria, have not died off; instead, they have been resilient and have survived, even without government support.

Abia was the first State in Nigeria to have a privately owned, independent gas-fired IPP, the Geometric Power in Aba. Abia also has a vibrant non-oil economy with palm oil, Cassava, and Cocoa (yes, Cocoa, Abia is the fifth-largest cocoa producer in Nigeria).

All these achievements have come not because of direct government policy in Abia State or the South East region.

Abia is blessed to have Aba, perhaps the largest SME cluster in Sub-Saharan Africa, which can generate enough Internally Generated Revenue irrespective of crude oil price remittances. Yet, how many government-approved industrial estates are in Aba?

Aba is a residential town overtaken by manufacturers, unplanned, unsafe for SME manufacturing.

We have a few ideas for the State and Region.

Call in the technocrats, agree, and publish a 20-year plan to identify Abia States’ critical competitive advantage and build on it. Abia State was part of the defunct Eastern region that, in 1964, was rated as the fastest-growing in the Third World by the UNDP. The road map should have a clear target to make Abia the most significant state economy in Sub-Saharan Africa by 2041. That’s an apolitical goal and it is possible with vision, action, and responsibility. The private sector base in Abia already exists; thus, the Government of Abia must see itself as a business enabler via business-friendly policies.

Make it easier to do business in Abia

There is no “Abuja made” in Nigeria, just “Aba made.” Own that brand, work it, set standards, drive it, monetize it. Such a slogan should be accompanied by clear policies to attract SMEs to Abia.

Pass clear business-friendly tax laws; take infrastructure, allow SMEs to pool together, raise capital stock, and invest in basic infrastructure. They can claim it back in PAYE tax credits. If an SME builds a solar farm and generates power to light up a street, give that as a tax credit back to the SME. If a state locates its manufacturing in Abia from another state, reduce their PAYE. Compete.

Fix up Aba, from the simple widening of roads, street numbering, open space green areas, and public sanitation to more ambitious goals of providing superfast broadband in Aba. Abia State got approval for a $200 million AfDB facility for Rural Access and Mobility Project (RAMP) in Abia in 2017. That’s funds to link Aba to rural areas and it should drive commerce.

If Cross River, without oil, could build Tinapa, why can’t Aba with 13% crude oil derivation fund earnings not build a modern industrial cluster with warehouses, offices, roads? These infrastructure plans can be financed by the State issuing a diaspora bond to Nigerians living offshore. The State should provide the land and title as equity.

The CBN policy on foreign exchange transactions presents an opportunity to the State. Abia has an active diaspora, draw up a remittance policy to enable that diaspora to send cash to relatives living in Abia or in the southeast. It should be possible for a citizen in Austin, Texas, to Pay USD to say Bank of America/Abia account in Dallas, and the Abia government pays Naira cash in Nigeria. The Abia government can build up large USD deposits, which it can deploy to importers at a profit to the State government. The State foreign reserves can be used to import items on the “CBN Import restriction list.”

The State wants to invest in an airport; this is good but not urgent. The State should focus on partnering with Anambra State to build a railway from Onitsha to Aba. Julius Berger has confirmed it can bring in any container from any port in the world to the Warri Port. The Anambra state Shippers Association has adopted Warri Port as its destination port of choice. Abia State should get investors to build bonded warehouses in Onitsha. With the rail link, imports can come from China to Warri then to Aba; similarly, cassava exports can go from Aba to Onitsha to China. Abia’s taxes from this port, rail carriage, and increased commerce will be bigger than 13% oil derivation.

Abia and other States will do well to discover their competitive advantage and build local economies from that point.

While the post has used Abia State, these opportunities for Regional synergies and taking advantage of the diaspora are open to all States in Nigeria. Economic development has to start from the cottage industries in the States. The States must prioritize Local Direct Capital and enable commerce, not just tax it.

FG has granted 12,000 expatriates permits to work in Nigeria in 2 years – Minister