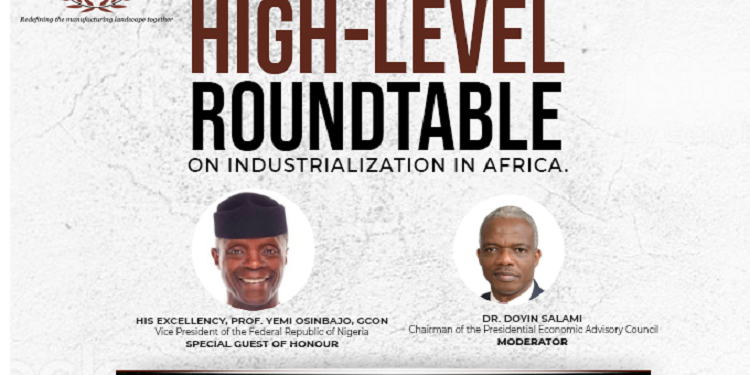 The Manufacturers Association of Nigeria (MAN), on Thursday, the 2nd of September, 2021, will be hosting a roundtable discussion themed, “Positioning African Industries for Economic Transformation and Continental Free Trade,” sequel to its 50th Anniversary.

As this is the first time discourse of this scale is being hosted in Nigeria’s creative capital Lagos, listeners from all over the world have shown keen interest in joining the compelling dialogue with a heavyweight set of panelists.
Guangzhou Automobile Group car brand, GAC Motor, will be sponsoring, as part of its efforts to contribute to the economic development of the African continent.

Hosting this event is the President of the Manufacturers Association of Nigeria, Engineer Mansur Ahmed, who will be bringing on board as panelists, veterans in economic matters. The Vice President of the Federal Republic of Nigeria, Prof. Yemi Osinbajo, will be the Special Guest of Honour, while President, Dangote Group, Alhaji Aliko Dangote, who is a major player in the manufacturing industry, will be among the panelists.

In its established custom of promoting Nigerian innovation and driving industrialization in Africa, GAC Motor is passionate about driving Africa’s economy to the point of global prominence. The Chairman of CIG Motors, the authorized distributor of GAC Motor in Africa, Chief Diana Chen, while speaking about the event in a phone interview, said,

“Clearly, Africa has great potential that needs to be harnessed, and we are determined to make that happen. As people from China, which is currently the world’s largest manufacturing powerhouse, producing nearly 50 percent of the world’s major industrial goods, we know how far Nigeria and this great continent can go. Truly, MAN has been doing well to promote made-in-Nigeria products and provide an enabling environment for manufacturers in Nigeria. GAC Motor has been and will continue to implement more strategies to stimulate economic transformation in this blessed continent. This 50th Anniversary marks the beginning of new things.”

About a year ago, the car brand became the official automobile partner of the Nigeria Football Federation (NFF). GAC Motor also emerged as the Automobile Brand of the Year in 2019 and partnered with the Lagos State Government in March this year to deploy 1,000 SUVs as taxis that will be operating in the smart city. The automobile company is also building a vehicle assembly plant in the State.

The high-level MAN event, strictly by invitation, will be streamed live on Facebook and YouTube for general viewing via @manufacturersnigeria.

Stakeholders in the manufacturing industry and the general public are invited to join the enriching conversation online.

FG lifts ban on flights from India to Nigeria