There has been a back and forth discussion between the Federal Government and the Nigerian Labour Congress (NLC) on the current minimum wage of N18,000. The unending negotiation has been about wage increment, which will see the minimum wage at N30,000.

The demand for wage increment has been deemed impossible by the Federal Government and some State governments until recently when the Buhari-administration constituted a Technical Committee on the Implementation of a new Minimum Wage.

While the presidency is still seeking alternative revenue sources to implement the new minimum wage, a new survey has been released by Picodi Analysts to determine how sustainable the minimum wage across the world is, in relation to prices of basic food products.

The argument on the part of Labour has been the continued increase in the cost of living in Nigeria, while workers’ salary has remained static since 2011. The current minimum wage is tagged as not being suitable for a quality standard of living within the country, and this new survey has proven the aforementioned opinion to be true.

The survey identified eight universal food groups, such as bread, milk, rice, eggs, cheese, meat, fruits and vegetables. These are basic nutritional products found on the shopping list of most adult-population in Nigeria and globally.

According to the list of items identified, an adult will spend an average of ₦31,536 on the basic product list.

Contents of the shopping basket and the average prices: 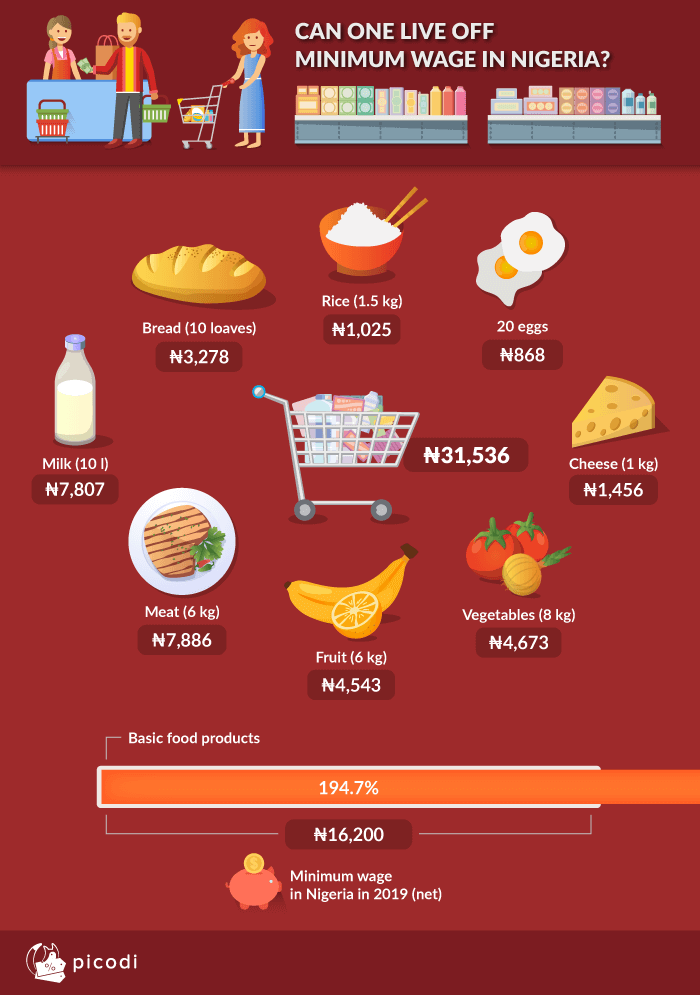 As seen in the list of products pricing, a worker in Nigeria is likely to spend double their minimum wage on household goods. The minimum wage in relation with the necessary global nutritional products is next to nothing, attesting to the statement that a worker is denied a quality standard of living in Nigeria every month.

“Considering the average prices of food in Nigeria, expenditure on basic food products makes 194.7 per cent of the minimum wage”, the report stated.

This places Nigeria behind 51 countries, and last on the list of most favourable minimum wages across the world.