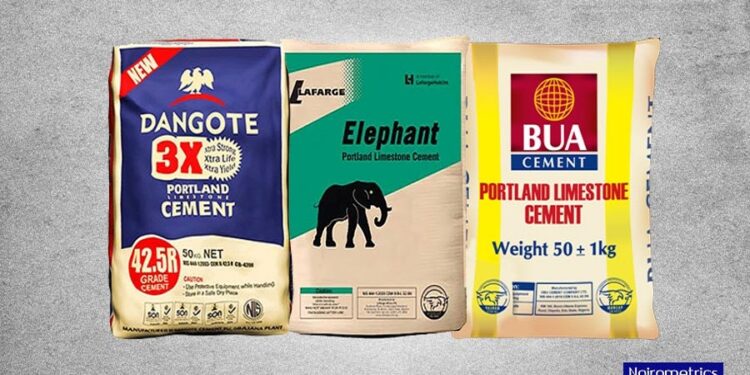 However, Year-on-Year (YoY), according to the trio’s nine-month performance, they were able to increase their revenue by 30.10% from N1.1 trillion generated in the nine months of 2020 to currently stand at N1.4 trillion.

Although the construction industry started to recover from the COVID-19 pandemic in the third quarter of 2020 and went on to post three consecutive quarters of real GDP growth rate, the second-quarter GDP report revealed that the construction industry declined by 23.08% when compared to the first quarter of 2021. The Real Estate industry also replicated a similar trend as it recorded its second consecutive quarterly decline of 0.72% when compared to the first quarter of 2021.

All three cement companies posted impressive third-quarter performances when compared to the third quarter of 2020, with Dangote Cement Plc leading the pack, accounting for 70.80% of the total revenue generated. BUA and Lafarge accounted for 13.37% and 15.84% respectively.

However, looking at its nine months performance, the cement manufacturer has generated ₦1.02 trillion, just 1.16% below what it generated in its full-year 2020 report. Compared to the nine months of 2020, the company increased its revenue by 34.24%. It accounts for 71.57% of the total revenue generated by the trio this year.

Diving deeper into their sales volume, sales in both Nigeria and Pan-Africa declined. Compared to Q2, the sales volume in Nigeria declined by 13.83% from 4.96 MT to 4.38 MT in Q3 2021 while for Pan-Africa, sales volume also declined by 5.4% from 2.85 MT recorded in Q2 to 2.70 MT recorded in the third quarter of 2021. This decline in volume affected the company’s revenue in the third quarter despite the marginal increase in the price of cement in the quarter.

According to Nigerian Price, Dangote cement now goes for a retail price of N3,900 per 50kg bag. In April, Dangote cement was being sold for N3,800. This represents a 2.63% between the second quarter and the third quarter.

“Given the strong rebound in Q3 2020 following the impact of COVID-19 in the first half of the year, volumes in Q3 2021 were slightly lower than Q3 2020, as anticipated, though worsened by heavier rains.

However, the overall growth trend continues, supported by our ability to meet the strong market demand across all our countries of operation. The economic performance and efficiency initiatives across the Group enabled the offsetting of inflationary pressures on some of our cost lines.”

As reported by Nairametrics, in April Lafarge increased its cement price from N2,400 to N3,600, representing a 50% increase in the price of cement. The company stated that price increment was necessary to offset some of the inflationary pressures, despite the recent cost reduction initiatives the company has taken such as the use of LNG fueled trucks. According to Nigerian Price, Lafarge’s Elephant Cement now goes for N3,750. This represents a 4.16% increase.

BUA Cement Plc generated the least of the three cement companies, generating only approximately N62.6 billion in the third quarter of the year. When compared to its performance in Q2 2021, its revenue generation declined by 0.73%.

Looking at its nine months performance, the company’s revenue accounted for only 13.09% of the total revenue generated by the trio. Although it accounted for the lowest of the three, the company still recorded an improvement as it generated N187 billion in the nine months of 2021, which represents a 19.39% increase when compared to the N156.5 billion generated in the first half of 2020.

After the company stated that they would not increase the price of cement, it would seem like they did a U-turn on this decision. In April, Nairametrics reported a statement made on the BUA Cement’s official Twitter account which stated that the ‘timing is not right,’ for any increase in the price of its cement. At the time, BUA cement was selling for N3,250. According to Nigerian Price, BUA cement now goes for N3,750, a 15.38% increase.

The earning presentation call disclosed that the revenue per ton recorded between the second and third quarter of 2021 reveals a 1.64% increase from N45,479.14/ton to N46,224/ton, also reflecting the increase in the price of cement.

The CEO of BUA Cement Plc explained that the quarterly decline was not a result of a decline in demand but was a result of annual maintenance on the plants. Yusuf Binji stated, “The increase in revenue resulted from price increase together with lifting bonus adjustments… The cement demand has remained strong in the past one year and of course you will have ups and downs. The slight decrease witnessed quarter on quarter is mostly due to the shutdown for the annual maintenance, in which our production slightly dipped and it is not because the demand was not there. We continued to experience very very strong demand even in the low season traditionally from July to September.”

Although the trio collectively posted declines in revenue when compared to the previous quarter, they still hold a collective market capitalization of N7.73 trillion as of the close of market on Tuesday, November 9, 2021.