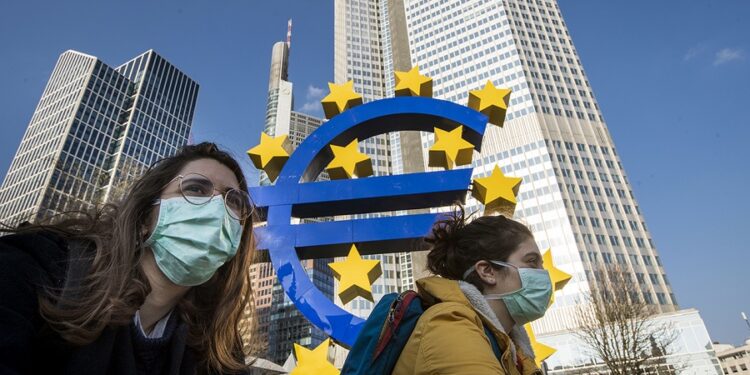 FRANKFURT AM MAIN, GERMANY - MARCH 19: Two students wear face mask while they pass the Euro sculpture with bicycles in the finance district on March 19, 2020 in Frankfurt, Germany. Restrictions from the state of Hesse have gone in force this week to stem the spread of the coronavirus (Covid-19) and that include the temporary shuttering of schools, public institutions and non-essential shops. Analysts see many banks as exposed to potential stress as a result of global disruptions caused by the virus. (Photo by Thomas Lohnes/Getty Images)

The World Health Organization on Wednesday said Covid-19 cases in Europe have increased for the third consecutive week, and urged countries in the region to exercise caution as temperatures fall and work, travel and leisure activities return to normal, thanks to the easing of lockdowns.

According to the health organization, Europe is the only area among the WHO’s six regions of member states where infection cases are on the increase, CNBC reports.

In Europe, the situation is being partially driven by surges in places where cases rose 50% in the last week. Places such as Czechia, Hungary and Poland.

Speaking during a Q&A session streamed on the organization’s social media channels, the executive director of the WHO’s health emergencies program, Dr Mike Ryan, stated “That’s three weeks of progressive increase. So while the overall global curve looks like it’s tracking down, Europe has gone up three weeks in a row.”

He further stated that with the winter season drawing closer, the rise in infection cases is starting to place pressure on healthcare systems in some countries thereby limiting the availability of intensive care beds.

Ryan blamed the surge, at least in part, on the easing of Covid restrictions.

The Director further said, “The Northern hemisphere is heading into another winter, and just need to be a little concerned about that uptick across Europe as we enter the late, late, deep autumn.”

In a bid to prevent further outbreaks across the region, he urged people preparing to travel and planning to meet in person for the holiday season to get immunized against the virus.

Recall that British medical experts are now monitoring a new sublineage of the Delta Variant discovered in rising cases in the United Kingdom.

According to researchers, this new strain has fueled global Covid spikes over the summer and they hold the opinion that it could be even more dangerous.