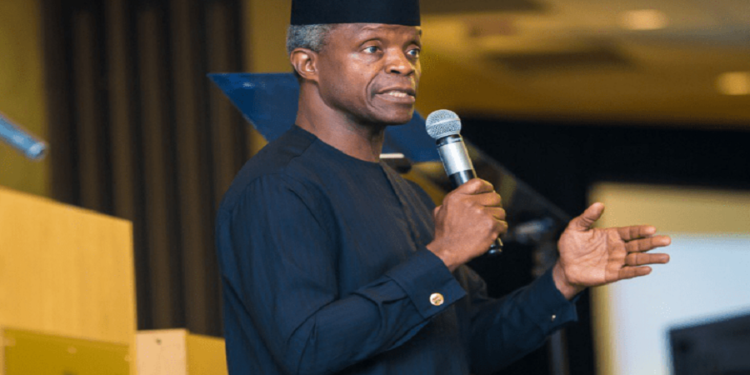 Vice President, Yemi Osinbajo revealed that under the Social Housing Scheme of the Economic Sustainability Plan, thousands of jobs have been created with the use of local building materials in the country.

The Vice President disclosed this on Monday, at the two-day Mid-Term Ministerial Performance Review retreat, presided over by President Muhammadu Buhari, where the Vice President delivered the progress report on the ESP implementation.

Osinbajo also disclosed that the social housing scheme has so far seen151.689 hectares of land made ready for development.

What the Vice President said

“1,151.689 hectares of land has been made ready for development,” Osinbajo said,

“The target is to build 300,000 houses. This has the capacity to accommodate a further 34,550 homes. The Programme is being funded by a mix of resources, including financing from the Federal Ministry of Finance, and a loan from the Central Bank under the ESP.

“Buyers have a window of at least 15 years to pay for their homes. The design is to build two-bedroom homes costing not more than N2 million, N3.75 million for a three-room unit, and N4.25 for a four-room unit.

“At the moment, 4,700 homes have been approved in 7 States for financing for commencement in October. 5,400 are scheduled for November 2021,” he added.

He warned that progress in the plan, however, has been much slower than envisaged, highlighting continuing delays in the disbursement of funds from the CBN citing that the debenture agreement for the sum of N200 billion with the CBN, which represents the bulk of the financing, was agreed in April and has been signed by all.

He also cited delays in the Solar Power Naija, the ESP Solar Electrification Programme, which is also designed to create jobs, develop a local solar industry and provide access to electricity to 5 million households in off-grid, under-served communities through new solar connections. This would bring energy access to 25 million Nigerians.

He revealed that the 5 million Solar Connections target is being delayed because while N140 billion was allocated through the CBN to facilitate it, only N7 billion of that has been disbursed.

“It will include the assembly or manufacturing of components of off-grid solutions to facilitate growth of the local manufacturing industry, while the use of local content will be encouraged. It will create in all 250,000 new jobs in the energy sector,” the Vice President stated.

Recall Nairametrics reported in June that President Muhammadu Buhari praised Nigeria’s effort in exiting recession, citing the successful execution of the Economic Sustainability Plan, launched by the FG to tackle the effects of the Covid pandemic on the economy.

“The Economic Sustainability Plan, our plan for the covid pandemic, is currently being executed, the plan is primarily focused on the non-oil sector which has recorded phenomenal growth, contributing over 90% to GDP growth in q1 2021,” the President said, adding that although marginal, Nigeria recorded GDP growth over 2 quarters, an evidence of the successful execution of the Economic Sustainability Plan by the federal government.

Under the Economic Sustainability Plan, Nairametrics reported that the FG’s plans include identifying fiscal measures for enhancing distributable oil and gas revenue, increasing non-oil revenues and reducing non-essential spending, proposing monetary policy measures in support of the plan, and providing a fiscal/monetary stimulus package, including support to private businesses.