by Samuel Oyekanmi
in Economy & Politics 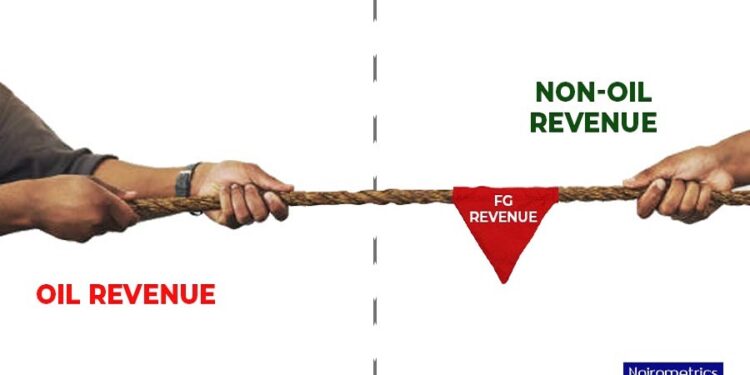 Nigeria generated a sum of N1.15 trillion as non-oil revenue between January and August 2021, which is 15.7% above the prorated target of N992.62 billion set by the federal government. This was largely driven by the performance recorded in VAT collections in the review period.

Total revenue recorded during the period stood at N3.93 trillion, 27% lower than the targeted revenue.

This is according to data from the public presentation of the 2022 FGN budget proposal and 2021 budget implementation report, made by the minister of Finance, Budget and National Planning, Mrs. Zainab Ahmed.

In the period under review, VAT collections stood at N235.77 billion, which is N76.8 billion higher than N158.95 billion prorated revenue target for the period under review. Recall that the federal government budgeted a sum of N238.43 billion as VAT revenue for the 2021 fiscal year, however in just 8 months into the year, 98.9% of the target for the year has already been met.

VAT has been a thorny issue in recent weeks as FG faces a legal tussle with powerful states who insist they should keep all the VAT collected from their states, rather than continue with the FG’s revenue sharing formula.

Similarly, in terms of company income taxes, a sum of N547.54 billion was generated in the same period, which is 20.5% above prorated figures and representing 80.3% achievement rate compared to an annual budget of N681.72 billion.

Oil revenues, which has for years contributed the most to government revenues is currently lagging behind non-oil revenues, averaging 61% over the last decade, based on data compiled by Nairalytics. According to the Minister of Finance, oil revenue for the period under review is N754.16 billion and was below target. Thus, so far in the year 2021 oil revenue has only managed to account for 19.2% of the total federally collected revenue hugely underperforming by 43.7%.

The decline in oil revenue despite the positive rally recorded in the global crude oil market is largely due to the decline in Nigeria’s crude oil production, occasioned by the supply cut implemented by the OPEC group and its allies.

Speaking on the performance, the finance minister stated that “Although Nigeria’s total production capacity is 2.5 mbpd, current (year to date) crude production is about 1.4mbpd (slightly short of the OPEC+ production quota), and an additional 300,000bpd of condensates, totaling about 1.6mbpd.”

Meanwhile, the OPEC+ has agreed to increase daily production by an additional 400,000 barrels per day by November 2021, based on the agreement made in the July OPC meeting. This could see Nigeria’s crude production record a slight boost in the coming future.

Budget deficit on a high amidst revenue crunch

Recall that the president, Muhammadu Buhari presented a budget of N16.39 trillion 2022 appropriation bill to the joint session of the National Assembly on Thursday last week, which is N1.82 trillion higher than the N14.57 trillion approved budget for the 2021 fiscal year.

The breakdown of the budget proposal, shows that a sum of N6.83 trillion was allocated for recurrent (non-debt) expenses, N5.35 trillion for capital expenditure (inclusive of statutory transfers, GOEs capital and project-tied loans expenses), while N3.61 trillion for debt servicing; with a total of N10.13 trillion as the available amount for the funding of the 2022 budget, which indicates a total fiscal deficit of N6.26 trillion, representing 3.39% of the national GDP.

The Director-General, Budget Office of the Federation, Ben Akabueze said, “Well, first of all, I think we need to understand that as large as the size of this budget might seem to Nigerians, and as you say, it is the largest so far, the truth of the matter is that our budget is still way lower than it should be.”

He also stated during the public presentation on Friday, that Nigeria faces a revenue problem and not an expenditure problem, which was further buttressed by the Executive Chairman of the Federal Inland Revenue Service (FIRS), Mr Muhammad Mamman Nami.

According to the FIRS boss, Nigerians are still not as tax-compliant as expected. He opined that the number of billionaires in Lagos State is more than the number of taxpayers in some other countries with higher personal income tax compared to Nigeria. He stated further that amongst the over 200 million Nigerians, only 40 million pay personal income taxes, which amounts to less than N1 trillion on an annual basis.

With oil revenue on a persistent decrease due to market fundamentals beyond the control of the Nigerian government, it appears to be the right time for Nigeria to look towards other sources of income apart from crude, especially considering the vulnerability of the country to movement in the global crude oil market.

Despite the upturn in non-oil revenue, especially in terms of company and value-added taxes, the government and its agencies need to do more in gaining the trust of Nigerians in order to encourage them to become tax compliant, as our tax returns appear to be below expectations, as mentioned by the FIRS chairman.