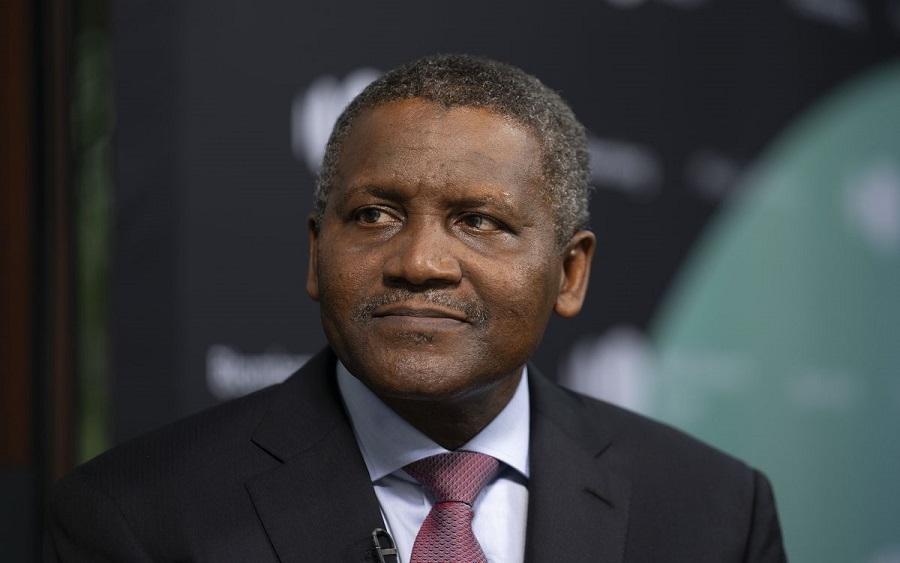 Aliko Dangote, Africa’s richest man and the founder of Africa’s manufacturing conglomerate, Dangote Group Plc, saw his net worth fall by $840 million to $17.5billion between January 7 and 8.

This is according to the information obtained by Nairametrics from Bloomberg’s billionaire tracker.

The decline in Dangote’s net worth can be attributed to decline in the share price of his flagship company, Dangote Cement Plc (DCP), as the market capitalization of the company lost N339 billion on the Nigerian Stock Exchange (NSE), following the completion of the first tranche of the Cement behemoth’s share buyback programme.

It is important to know that majority of Dangote’s fortune is derived from his 86% stake in the publicly-traded Dangote Cement, as the billionaire holds the shares of the company directly and through his conglomerate, Dangote Industries.

Omokolade Ajayi is a graduate of Economics, and a certificate holder of the CFA Institute’s Investment Foundation Program. He is a business analyst, and equity market researcher, with wealth of experience as a retail investor.

Elon Musk has Asperger’s syndrome, reveals 2 other things on SNL

The billionaire admitted to Dogecoin being ‘some kind of hustle.’ The second richest man in the world appeared on a popular American late-night TV show and the world got to see him for the first time as a regular man and not the CEO Of Tesla and Space X.

In his comedy skit, he shared certain aspects of himself that he hasn’t shared before and also got to answer some frequently asked questions about himself.

We are going to pick the three highlights of the show for our readers who haven’t seen it.

Elon Musk revealed that he has Asperger’s syndrome and he is probably the first SNL host to have that. We quickly did a bit of research on Asperger’s syndrome and discovered that it is a neurodevelopmental disorder characterized by significant difficulties in social interaction and nonverbal communication, along with restricted and repetitive patterns of behaviour and interests.

According to WebMD, people with Asperger’s syndrome are not socially driven but are also highly intelligent. They also find it very difficult to make eye contact with people.

READ: How young Elon Musk started and sold 3 businesses for $1.9bn before Tesla

Defined cryptocurrency and caused a plunge in Dogecoin

Elon Musk defined Cryptocurrency in his own terms. He appeared on a subsection of the SNL where he was quizzed on what he thinks of cryptocurrency. The billionaire replied in his own words:

“Cryptocurrencies are a type of digital money but instead of being controlled by a central government. They are decentralized using blockchain technology.”

When pressed further on what Dogecoin really means by the TV host, he admitted to it being some kind of hustle. According to the Guardian, this statement led to the price of Dogecoin plunging later that day.

I am not a normal guy

Finally, Elon Musk’s addressed his twitting habits and why he might come across as weird to some people. He explained that he posts weird things sometimes on Twitter because that’s how his brain works and most times he finds such things funny. In his words:

“Look sometimes I know I say or post strange things online but that’s just how my brain works. To anyone I have offended I just want to say, I reinvented electric cars and I am sending people to Mars on a rocket ship. Did you think I was also going to be a chill, normal dude?

Elon Musk is not the first billionaire to appear on SNL. Donald Trump, the former president of the United States has appeared twice on the show. Founder of Microsoft, Bill Gates’ cash in the bank can currently buy the Nigerian stock market.

Most recent data postulates that the tech billionaire currently holds about $59.1 billion in the bank, far surpassing Nigeria’s Stock Exchange valuation of $53.7 billion (N20.4 trillion) at the time this report was drafted.

Bill Gates Net Worth amid Divorce With Melinda

The American billionaire is currently the fourth richest man in the world and his net worth is at a record high despite transferring nearly $2.4 billion in securities to Melinda Gates via Cascade Investment, Bill Gates investment vehicle, after filing for a divorce.

The troubled couple however affirmed their plan on remaining co-chairs and trustees of the Bill & Melinda Gates Foundation. Bill Gates’ close confidant, Warren Buffett is the foundation’s third trustee.

Bill Gates’ wealth is currently valued at $146 billion and he is estimated to have gained 14.1 billion in barely four months.

Gates has earned more than $50 billion in stock and dividends, including a $3.3 billion payout from Microsoft in 2004, as he owns about 1% of the world’s biggest software company.

He is the biggest shareholder of Canada’s biggest railroad operator, the Canadian National Railway.

The billionaire has also disclosed that he doesn’t have any Bitcoin and spoke on the high price swing of the flagship crypto, often driven by “mania” prevailing in crypto markets making it hard for a normal investor to predict the crypto asset’s trajectory.

The data above shows that Bill Gates holds a significant amount of his wealth in cash, although it is noteworthy that he also has exposures in global equities, real estate, and collectables, which are also significant wealth creators for him.

Market experts have opined that the rationale behind holding so much cash amid rising inflation is to fund his philanthropic missions as he donates much of his wealth to causes that help better the world.