A day after their exquisite and efficient performance against the Bafana Bafana of South Africa – conquerors of seven-time champions and host nation, Egypt – that saw them reach the semi-finals of the 2019 Africa Cup of Nations (AFCON), the Super Eagles received pledges of more dollar rain from two of Africa’s richest businessmen, Aliko Dangote and Femi Otedola.

On a visit to the team’s Le Meridien Cairo Airport hotel on Thursday morning, during which he urged the players to even redouble their efforts in order to cross the semi-final stage on Sunday, President of the Nigeria Football Federation, Mr. Amaju Melvin Pinnick put a call through to the two well-known philanthropists and tasked them to commit to supporting the team.

[READ ALSO: Aliko Dangote is the only African among the world’s 100 richest people]

While Dangote made a pledge of $50,000 to the team for every goal in their remaining two matches at the championship, Otedola pledged the sum of $25,000 for every goal.

Alhaji Aliko Dangote, who holds Nigeria’s second-highest national honour (GCON) is the President of Dangote Group and is ranked as the richest person of African descent in the world. The Dangote Group has interests in various commodities in Nigeria and other African countries.

Further words of encouragement came from His Excellency, President Muhammadu Buhari (GCFR), following Wednesday night’s victory, with the President urging “the team and their handlers to be focused, disciplined and scale the remaining two hurdles to glory.”

Congratulations to the Super Eagles on a well-deserved victory over South Africa, tonight. You represent the resilient and indomitable Nigerian spirit. Two more victories, and the coveted Trophy will come home to us. All Nigerians are looking forward eagerly. Nigerians and South Africans dominate the top 10 spot on Forbes’ Africa billionaires list, which is an annual ranking of the richest Africans compiled and published by American business magazine, Forbes.

The 10 richest people in Africa according to Forbes have made their wealth sources including investments in diamonds, telecom, cement, sugar, media and mining amongst others. In total, they have a combined net of $59.8 billion.

The top 10 list doesn’t include a woman and is dominated by four South Africans and three Nigerians, with notable names like Aliko Dangote, Nicky Oppenheimer, Johann Rupert, Mike Adenuga, Abdul Samad Rabiu amongst the rest.

According to Forbes, Koos Bekker is revered for transforming South African newspaper publisher, Naspers into an eCommerce investor and cable TV powerhouse. In 2019, Naspers put some assets into two publicly-traded companies, MultiChoice Group and Prosus which contain the Tencent stake.

Patrice Motsepe, the founder and chairman of African Rainbow Minerals, became a billionaire in 2008 – the first black African on the Forbes list. In 2016, he launched a new private equity firm, African Rainbow Capital, focused on investing in Africa.

Naguib Sawiris is a scion of Egypt’s wealthiest family. His brother Nassef is also a billionaire. He built a fortune in telecom, selling Orascom Telecom in 2011 to Russian telecom firm, VimpelCom (now Veon) in a multibillion-dollar transaction.

READ: Many millionaires plan to buy Crypto before 2022

Issad Rebrab is the founder and CEO of Cevital, Algeria’s biggest privately-held company. Cevital owns one of the largest sugar refineries in the world, with the capacity to produce 2 million tons a year. Cevital owns European companies, including French home appliances maker Groupe Brandt, an Italian steel mill and a German water purification company.

Abdulsamad Rabiu is the founder of BUA Group, a Nigerian conglomerate active in cement production, sugar refining and real estate. In early January 2020, Rabiu merged his privately-owned Obu Cement company with listed firm Cement Co. of Northern Nigeria, which he controlled. The combined firm, called BUA Cement Plc, trades on the Nigerian stock exchange; Rabiu owns 98.5% of it. Rabiu, the son of a businessman, inherited land from his father. He set up his own business in 1988 importing iron, steel and chemicals.

Johann Rupert is chairman of Swiss luxury goods firm, Compagnie Financiere Richemont. The company is best known for the brands Cartier and Montblanc. It was formed in 1998 through a spinoff of assets owned by Rembrandt Group Limited (now Remgro Limited), which his father formed in the 1940s. He owns a 7% stake in diversified investment firm Remgro, which he chairs, as well as 25% of Reinet, an investment holding co. based in Luxembourg.

Nicky Oppenheimer, the heir to his family’s fortune, sold his 40% stake in diamond firm, DeBeers to mining group, Anglo American for $5.1 billion in cash in 2012. He is the third generation of his family to run DeBeers, and took the company private in 2001. For 85 years until 2012, the Oppenheimer family occupied a controlling spot in the world’s diamond trade.

Nassef Sawiris is an investor and a scion of Egypt’s wealthiest family. His most valuable asset is a nearly 6% stake in sportswear maker Adidas. In December 2020, he acquired a 5% stake in New York-listed firm Madison Square Garden Sports, owner of the NBA Knicks and the NHL Rangers teams. He runs OCI, one of the world’s largest nitrogen fertilizer producers, with plants in Texas and Iowa; it trades on the Euronext Amsterdam exchange.

Aliko Dangote, Africa’s richest person, founded and chairs Dangote Cement, the continent’s largest cement producer. He owns 85% of publicly-traded Dangote Cement through a holding company. Dangote Cement produces 45.6 million metric tons annually and has operations in 10 countries across Africa. Dangote also owns stakes in publicly-traded salt and sugar manufacturing companies. Dangote Refinery has been under construction since 2016 and is expected to be one of the world’s largest oil refineries once complete.

The top 5 billionaires, as a group did not do well at the last trading session of the week amid an era showing the U.S dollar rebounded. 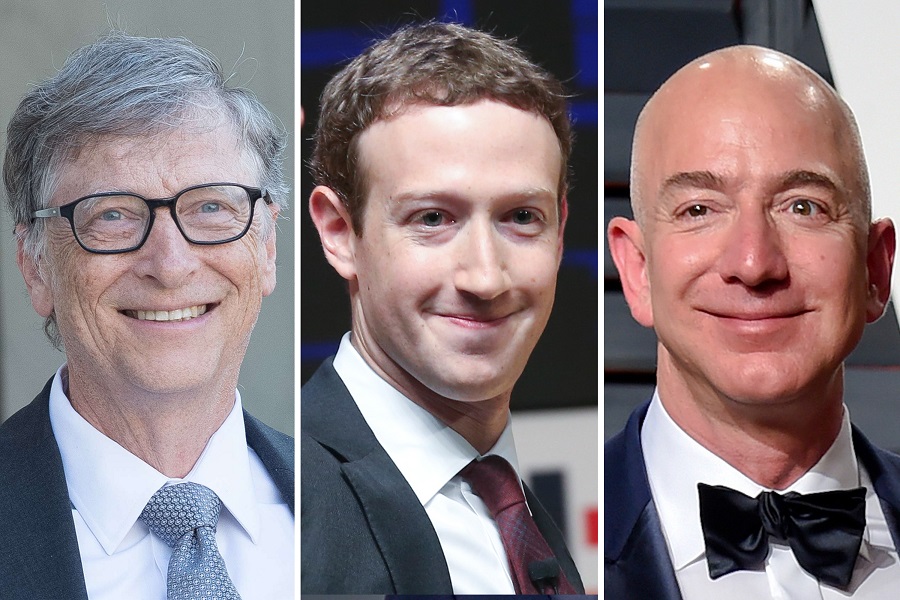 The top 5 billionaires on planet earth had an unimpressive showing at the most recent trading session.

The top 5 billionaires most recent daily loss stood at $7.754 billion

The world’s richest person printed the highest wealth loss for the day as Elon’s wealth dropped by $4.28 billion. His wealth is now estimated to be worth $197 billion.

Investors got alarmed that Tesla got outpaced by Renault and Volkswagen in an important car market like Europe.

Jeff Bezos, the current CEO, and founder of Amazon is presently valued at about $182 billion, printing a wealth drop of $1.26 billion for the day.

READ: 5 habits of Nigeria’s business billionaires you should emulate

In the third position is another popular tech genius, Bill Gates, the founder of the most valuable software company, Microsoft.

For many years, Gates had been the world’s richest man. He now has a wealth fortune of $132 billion, as recent data revealed it dropped by $814 million for the day.

Europe’s top entrepreneur and French celebrated fashion icon, Bernard Arnault, is fourth on the list with a fortune now estimated to be around $109 billion, with its most recent drop by $3.55 billion.

Facebook’s founder, Mark Zuckerberg is fifth on the list, with a fortune estimated to now be valued at $95 billion, on the account, he was the only billionaire in the top 5 list that had a wealth gain for the day.

The top 5 billionaires, as a group, infamously did not do well at the last trading session of the week amid an era showing the U.S dollar rebounded strongly.

Growing concerns that the leading global technology brands have grown too powerful has led some investors to trim their bullish bets cumulatively on the top 5 billionaires’ businesses.

Stock holdings of Tesla recorded impressive gains on the NASDAQ and it is looking good for Tesla Founder and Chief Executive Officer, Elon Musk, whose fortune has gained $31.6 billion in 2021 alone.

READ: Why You Should Not Invest Like Warren Buffet

Specifically, the world’s celebrated engineer and philanthropist had led the revolution of electric cars which is showing great potential to replace fossil-based combustion engine-driven vehicles.

READ:  Tips that will help you win in business – Amazon Founder

Today, Tesla builds not only all-electric vehicles, but also infinitely scalable clean energy generation and storage products. Tesla believes that the faster the world stops relying on fossil fuels and moves towards a zero-emission future, the better.

Musk’s wealth gain is largely attributed to Tesla, the electric car automaker, which has gained about 700% in 2020 and has become by far the world’s most valuable automaker in the world, despite producing far less than Volkswagen, Toyota, or General Motors.

Stock experts anticipate that a Democratic-controlled U.S Senate is bullish for Tesla, on the bias that there would be more pro-renewable investments, at least for the next few years.