by William Ukpe
in Business News 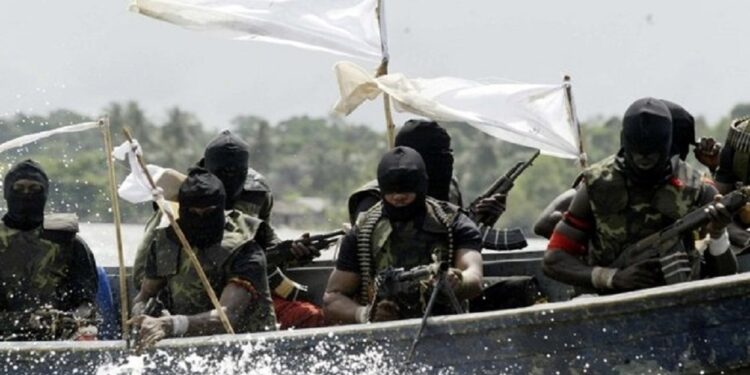 The Danish military reported that a frigate ship killed four pirates on Southern Nigerian waters of the Gulf of Guinea.

This was disclosed in a report by the Danish military on Thursday, according to Reuters.

The report stated that the ship, Esbern Snare was conducting an operation protecting shipping routes in the Gulf of Guinea when it spotted a fast-moving vessel carrying eight suspected pirates near a number of commercial ships on Wednesday.

What the report said

They reported that the incident took place in international waters, 25 to 30 nautical miles south of Nigeria’s territorial boundary.

The Danish Military added that a motorboat, spotted by a helicopter deployed by the frigate, was carrying equipment associated with piracy, including ladders.

“After the frigate fired warning shots, the pirates opened fire on Danish navy special forces, who in turn shot and killed four pirates and wounded one,” the Danish military said in a statement.

“The remaining four pirates were taken on board the frigate, and no Danish personnel were hurt in the incident,“ they added.

It is the first time the frigate has opened fire during its current mission in the Gulf of Guinea, the spokesman said. The frigate will operate in the region until April next year.

Nairamerics reported last month that Nigeria’s fight to protect its maritime waters in 2021 received a major boost as the International Maritime Bureau (IBM) reported that global piracy cases dropped to the lowest level since 1994. The Gulf of Guinea region recorded 28 incidents of piracy and armed robbery in the first nine months of 2021, in comparison to 46 for the same period in 2020, with the Nigerian area recording only 4 related cases for the same period.

They added that it was the lowest level of reported incidents since 1994, highlighting that in 2021, IMB’s Piracy Reporting Centre (PRC) reported 85 vessels boarded, nine attempted attacks, two vessels fired upon and one vessel hijacked.