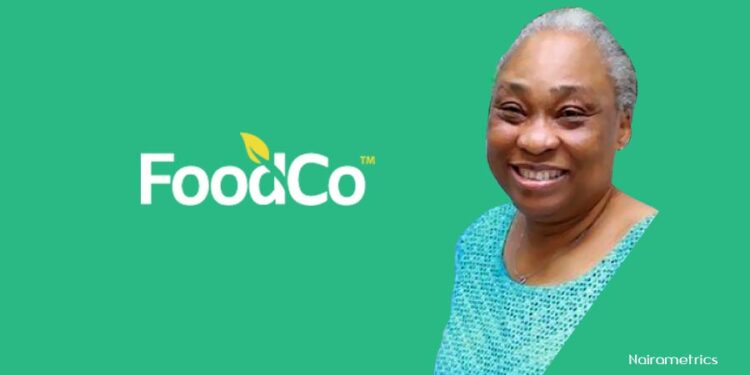 FoodCo will be remembered as one totally Nigerian brand that grew from being a little store for fresh fruits to become a one-stop-shop for consumer goods including a supermarket division, restaurant chain, entertainment center and manufacturing unit. Sola Sun-Basorun is the name behind the brand story, and how she grew this business from a little side-hustle in 1981 supporting her income as a University staff, to become a major retail brand is a story worth telling.

Sun-Basorun was born and raised in Ibadan, present-day Oyo state and this was where she had most of her education. As a child, her father would take her on holidays to England and she saw retail outlets and wished to someday own something like that. Back in Nigeria, she also enjoyed visiting outlets like Kingsway and Leventis, and kept picturing a time when she would own a big retail outlet.

After her schooling, she got a job working at the library at the University of Ibadan. Even then, she had the dream of owning and running a retail store but the landscape did not seem ready for it. Also, there was the issue of funds, as well as expertise and manpower. As much as Sun-Basorun wanted to own and run a supermarket, she was aware that she neither had the experience nor know-how. After she got married to Dr Adegbenga Sun-Basorun, she finally decided to take the bull head-on.

They started the retail store using the gifts that had been given to them as wedding presents. Basorun recalled that it amounted to about N12, 500 and it was enough for them to purchase three deep freezers, a refrigerator, a generator and a brand new bus in 1981.

Combining a full-time job, plus running a retail business and managing the home was a lot on her hands, but she kept trying to maintain a balance. In her words, “I remember back then, every time I felt I was running out of time, I would sit down and start logging how much time I spent on each activity in a week. I would look at the time I spent on the family; at work; with the children and every aspect of my life and with that I would check if it was balanced and if it wasn’t, I would adjust and that was one trick I learnt early enough.”

Simple as this was, it helped her juggle all three efficiently. After running a fresh fruits store for a while, she decided to take it up to a retail store. In 1982, she took her sabbatical leave at the university and got a bank loan and FoodCo was officially launched as a proper retail store.

“We started very little with the fresh fruits in 1981, but I remember the real supermarket started in 1982 with a N5,000 loan from Union Bank, because after we paid the rent and did the shelving, there was no money to fill the store, so we had to apply for a loan, but because we had no collateral, we only got loans as civil servants and the maximum they could give myself and my husband on our salary scale was N5, 000, so that was what we started with,” she explained in an interview.

With just four staff, the business got running. In 1985, Sun-Basorun finally left her job in the university to face the retail business full-time. According to her, defining their roles in the business helped stabilise the business. Couples running a business are often tempted to think that by just being couples, they would know what to do to get the business to grow, but this couple defined each others’ roles so that at every point, they knew who was responsible for what.

The company fell into some bad times in the 2000s and they tried to sell it off. Unable to get a buyer, the couple decided to give it another go. As at 2010, FoodCo had 2 outlets. By 2020 it had 12 outlets. Presently FoodCo has 14 outlets

“FoodCo crashed once, in fact, this is the second generation of FoodCo. We had five stores before; one in Osogbo and the other four in Ibadan and everything just went wrong. We were not making enough sales or profit and we just didn’t know what was happening, so we had to close all the other branches and focus on the branch in Bodija, Ibadan, while trying to figure out what the problem was and we started all over again.

“That happened between 2000 and 2006, one after the other, we had to close the branches, until there was only one left. So we looked at every aspect of the business for such not to repeat itself and then started over again and opened the second branch in 2010.”

The business has now grown from that single branch to several branches with over 700 staff. The first Lagos outlet was opened in 2019.

Just in 2020, her son Ade Sun-Basorun stepped in as Chief Executive Officer of FoodCo Nigeria Limited, while she assumed the position of Chairman. FoodCo won the Retailer of the year, 2020 Marketing Edge Brands and Advertising Excellence Awards, Retail Company of the Year; Multigenerational Company of the Year, 2019 BusinessDay Nigerian Business Leadership Awards (Excellence in Enterprise); and the 2020 BusinessDay Nigerian Business Leaders Awards.

Sola Sun-Basorun can very well beat her chest to say that she has built a business that will outlive her. The retail brand now has an e-commerce outlet where people can place orders online and have their goods delivered to their location so we are also seeing another phase in FoodCo’s growth.

However, the scholarship was discontinued because primary and secondary education in almost all states of the federation is free. Plans have reached advanced stage to refocus FoodCo’s investment in education CSR to make it more relevant and impactful.

Also, the Big Break with FoodCo is an access-to-market initiative aimed at helping aspiring entrepreneurs scale their businesses faster by selecting three winners in its pitching contest.