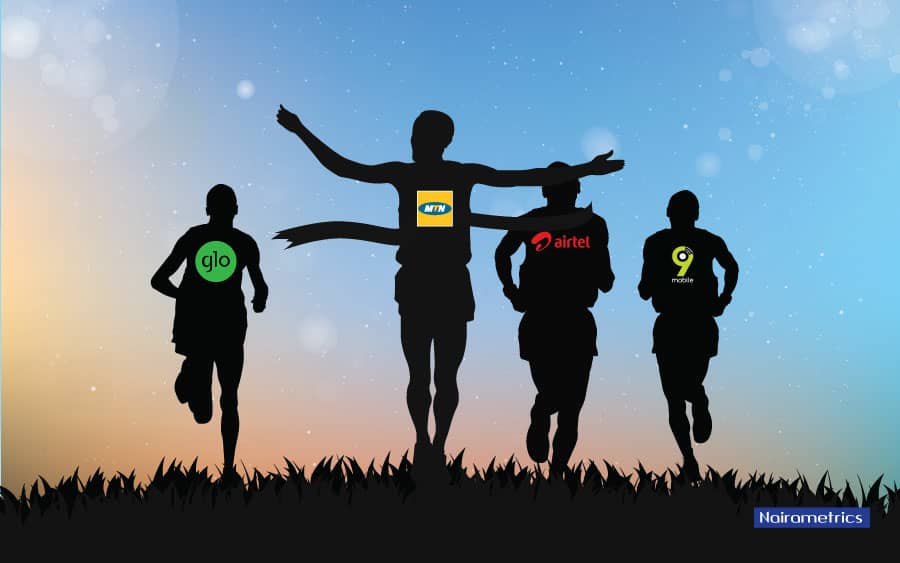 Competition for internet subscribers in Nigeria took a different turn as Nigeria’s largest mobile telecommunication company, MTN, led the way in the month under review. Operators in the industry showed no sign of relenting, as they intensified efforts to outcompete each other for market share in an increasingly fickle market.

According to data from the Nigerian Communication Commission (NCC),  a total of 493,556 internet subscribers dumped Glo and 9mobile during the month in favour of MTN and Airtel, two of Nigeria’s largest data sellers.

MTN edges out Airtel after a 5-month drop

In a turn of events, MTN edged out Airtel for the first time in 5 months, gaining a total of 488,120 internet subscribers. This contrasts sharply against an earlier report which showed that MTN lost a whopping 667,245 internet subscribers, while Airtel Nigeria gained the biggest.

9mobiles also failed to attract new subscribers as its steady decline persisted in the month under review. In October alone, 122,711 internet subscribers dumped 9mobile, as against 156,065 recorded in September.

Airtel continues to trail as MTN extends market share. While Airtel has significantly gained subscribers this year, it still trails behind MTN in terms of total internet subscriber base.

While GSM  companies continue to jostle for market share, it has often come at the expense of poor service and lack of accountability.  Just last week, Nairametrics reported the reactions of Olanrewaju Ogunmefun, popularly known as Vector, who took to Twitter along-side other Nigerians to criticize MTN’s data charges.

Vector expressed his frustration at quick data depletion. He said Nigerians work hard to earn their pay, only for telcos to scoop everything through data depletion. His outburst against MTN led to the hashtag, #MTNdoBETTER on Twitter.

According to an MTN user, who spoke to Nairametrics, “MTN internet service is fast, but the data burns out quickly.”

A Glo user, stated, “Glo data is cheap as they give several bonuses but very frustrating at the same time. I recently subscribed and ended up not being able to use my data because of bad network.”

To an Airtel user, “Airtel data is fast, but the data still gets exhausted quite fast. Although I use a new data plan recently introduced with more gig, the consumption rate is very high.”

[READ ALSO: Why Nigeria’s Data woes may not end soon]

A 9mobile user lamented, “I still use 9mobile for my internet bundle, but I really don’t understand what is wrong with the system. I recently subscribed for 2 gig, which got exhausted in two days without any downloads. I will move to another network soon.”

Nigeria’s internet download speed remains among the slowest in the world, and while the telcos continue to rake in heavy gains from data sales, consumers’ continue to groan for lack of fast, cheap and affordable internet services.

The marathon continues for Nigerian Breweries with its 2020 financials. Humanity might need more booze to survive the increasingly daunting intricacies of life, but Nigerian Breweries 2020 financial statement is proof that even the best can get caught up in the reality of changing business lifecycles.

Nigerian Breweries Plc had floored the market providing both alcoholic and non-alcoholic premium quality beverages across the nation. But with brands like Star lager beer launched as far back as 1949, Gulder lager beer launched in 1970, and even the family-friendly Maltina introduced as far back as 1976, it is only natural that both the old and new generation competition gives them a run for their market share.

Much like other old money companies, Nigerian Breweries has done its bit to remain relevant in the industry from creating new variants of existing favoured brands to paying dividends consistently annually for the past few years. Yet within the same period, the company’s financial statements have been a testament to its streamlined market share and reducing profits. The marathon continues with its 2020 financials. The industry giant may as well be setting itself up for a debt quagmire peradventure its projections do not match the true reality of events.

2020’s unfavourable financial/ business environment led to the increase in the prices of raw materials and disruptions in logistics for many Nigerian-domiciled businesses including Nigerian Breweries. Raw materials and consumables witnessed a 17% increase despite the marginal growth in revenue.

While the group’s 2020 results revealed a 4.35% increase in revenue from N323 billion in the prior year to around N337 billion, these gains were curtailed by a higher-than-par increase in cost of sales which had risen by 13.9%, from the N191.8 billion expended in 2019 to N218.4 billion as its 2020 financials reveal and interest rates going way up.

The company’s lower operating expenses were not enough to salvage the disruption caused by the raging interest expense following increased charges paid on bank loans and overdraft facilities as well as the significant increase in overall debt. Between 2019 and 2020 alone, long term loans and borrowings increased by 974% from N4.8 billion to as much as N51.8 billion. Even trade and other long term payables increased by 35%.

In its financials, the company noted that it has revolving credit facilities with five Nigerian banks to finance its working capital. The approved limit of the loan with each of the banks range from ₦6 billion to ₦15 billion (total of ₦66 billion) and each of the agreements had been signed in 2016 with a tenor of five years. The Company had also obtained Capital and Working capital finance from the BoI in 2019.

READ: Manufacturing sector in Nigeria and the reality of a “new normal”

It is no news that the company is involved in diversified lease arrangements. Following reclassifications made in 2019 to some of its lease assets, the 2020 asset base also witnessed significant increase in Right of Use Assets which increased by 288%% from N11.1 billion to N42.9 billion. Yet, the fact that in one year, interest expense on Lease Liabilities rose from N19.7 million in 2019 and to a whopping N4.171 billion shows that the company is taking way more debt than its books require.

But what’s it using all the cash for?

Beyond rising material costs, borrowing costs have been huge and the annual interest payment by virtue of these loans make the possibility of higher profits for the company a mirage. That said, the overall increase in total liabilities might not have been such a bad idea if the funds were being used to increase revenue and profits. But having a huge chunk of all that money in cash creates a different kind of challenge. Cash and bank values in its statement of financial position significantly increased by 377% from N6.4 billion in 2019 to N30.4 billion in 2020.

Is the cash being held to mitigate possible challenges of the volatile economy or are they being used to pay dividends? Even at a share price of N52 per share, the company’s price-to-book value sits at 2.5816, testament of its dire overvaluation. Consequently, there is an ardent need for the company to come up with newer ways to attract the wider market and keep its book in the green with a little less external funding. Despite a challenging 2020 to individuals and businesses caused by COVID-19 disruptions, MTN Nigeria’s financial and non-financial information showed marked improvements compared to its 2019-year-end as well as prior quarters of 2020 results that were impacted by the COVID-19 pandemic.

Indeed, the evolving pandemic which intensified lockdown, remote working, and work-from-home procedures, appeared to have led to increased adoption of MTN Nigeria data and digital services.

Specifically, year-on-year on non-financial information, mobile subscribers increased by 12.2 million to 76.5 million; active data users increased by 7.4 million to 32,6 million while the company’s mobile money business continued to accelerate with a 269.2 % increase in the number of registered agents to over 395,000 and 4.7 million active subscribers from approximately 553,000 in 2019.

The proposed dividend implies a yield of 3.4%. Having paid an interim dividend of NGN3.50 in 2020, the proposed dividend, if approved, will bring the total dividend per share to NGN9.40 or c.19% higher compared with 2019.  We expect a positive reaction from the market due to the marked improvement in earnings. However, the market’s reaction may be dampened by negative investor sentiments on equities arising from the uptick in yields on fixed-income securities.

We expect that the introduction of additional customer registration requirements requiring subscriber records are updated with respective National Identity Numbers (NIN), and the continued suspension of the sale and activation of new SIM cards will affect subscriber growth.

Tade Fadare PhD, is an economist, and a professionally qualified accountant, banker and stockbroker. He has significant experience working or consulting for financial institutions in Europe, North America, and Africa.